Americans Are Rejecting Rule By Elites 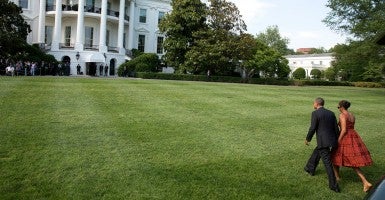 The majority of newly elected members of Congress are men and women who ran and won in direct opposition to President Obama’s policies. But there is more to their victory than a triumph over liberal policies. The 2014 election also represents a repudiation of an attitude and style of governance that has become entrenched in Washington’s political culture:  an arrogant, smug and ideologically driven elitism.

Elitist sentiments periodically slip out. Addressing a congregation of California’s beautiful people at a San Francisco fundraiser in 2008, then candidate Obama talked of “bitter” small town folks  who “cling to their guns and their religion.”

A self-righteous Attorney General Eric Holder described America as “a nation of cowards” because they did not discuss racial issues according to his standards.

Of course, the most recent example is  Professor Jonathan Gruber, the Massachusetts Institute of Technology economist who advised the White House during enactment of the Affordable Care Act, or “ObamaCare.”  He apologized in congressional testimony after his videotaped remarks surfaced demeaning American voters as “stupid.”

Gruber’s most offensive comment was this: “Lack of transparency is a huge political advantage. And basically, call it the stupidity of the American voter or whatever, but basically that was really, really critical for the thing to pass….Look, I wish …that you could make it all transparent, but I’d rather have this law than not.”

Remarkably, when the committee asked for his work product — the economic modeling funded by the allegedly dimwitted taxpayers — the professor told the committee to consult with his lawyer! Naturally, a committee subpoena quickly followed, and the drama continues.

There is  more to these episodes than  isolated displays of academic arrogance, pretensions to social superiority or smug self-righteousness. It is an anti-democratic spirit. The theme of Washington governance: You don’t know what is good for you, the bureaucratic experts and their academic apologists do, so get with the program!

The ongoing debate over “Obamacare” is perhaps the biggest case in point. There  is a wide  gap in perception on the Affordable Care Act  between most ordinary Americans and most health policy “experts” (such as academics, health industry leaders, “labor and consumer advocates”), a reliably “progressive” cohort.

Concerning Obamacare, in October 2011 the Kaiser Family Foundation, found that just 34 percent of the public had a favorable view of the law. A month later, the liberal Commonwealth Fund polled “experts” on the law and found that 89 percent of them favored the law’s continued implementation. On such hot button topics as the individual mandate, the potential of the law to control health care costs or improve quality, the Commonwealth surveys confirm “expert” enthusiasm.  As for the general public, other major surveys tell a very different story.

No wonder the administration and its allies are understandably frustrated. When exchange enrollment closed last April, President Obama declared the health care debate “over.” But the supposedly bovine masses refused to cooperate, and polls showed a continued slide in the law’s popularity.

No doubt, the administration’s academic allies look at these polling results and conclude that the American people are like self-destructive children who just don’t know what’s good for them. The hated Tea Party opponents must be seen as the worst of the rejectionists, acting like crazed World War II Japanese soldiers, marooned on a desolate island, refusing to accept their inevitable defeat.

For “progressives,” the Affordable Care Act is, after all, the latest stage in a linear historical process, marked by the milestones of Medicare and Medicaid, in which steadily expanding government control over health care is a positive eventuality; a presumption fueled by a curious mixture of arrogance and mysticism.

While the White House is desperately trying to distance itself from Professor Gruber’s videotaped gaffes, the recent controversy should not obscure a larger and more profound truth: ObamaCare epitomizes the progressives” long-lived and unshakable faith in large centralized government. It satisfies an ideological urge to guide and direct complex sectors of the modern economy, like the huge health care sector, through rigorous central planning based on academic and bureaucratic expertise. The modern administrative state we have today — rule by detailed regulation — is their creation. It is inherently elitist.

In short, the progressives’ faith in government is buttressed by a deep and abiding skepticism of the capacities of ordinary Americans to govern their own lives. Professor Gruber’s attitude is, in fact, more widely shared among Washington’s professional and policy elites than one might imagine. Many of his colleagues are firmly committed to the concentration of power to micromanage the decisions of millions of Americans in their personal health care choices, ranging from the kinds of plans they can get, to the kind of medical and preventive treatments they must have, to how their health dollars are to be allocated.

ObamaCare does all of that, of course, and more. Most health policy analysts, with the exception of the few conservative or libertarian dissidents, strongly favor this regulatory governance, though quite a few would also prefer, as President Obama himself once declared, a more straight-forward government monopoly over Americans’ health care, technically called a “single payer “ system.

Americans don’t like ObamaCare. But the regulatory behemoth grinds on relentlessly, even at the expense of the rule of law. If ObamaCare’s employer mandate is politically problematic, suspend it; if Congressmen want a special subsidy for their health insurance, provide it; if federal health exchanges need taxpayer subsidies, make them up. Meanwhile, run up more spending, higher taxes and bigger debt.

Do Americans really want to be governed like this? Sen. Barry M. Goldwater (R-Ariz.) responded 50 years ago, when he issued his clarion call to Americans to “resist the accumulation of power by those who claim they know best.”

In the 1964 election, most Americans ignored Goldwater’s warning about arrogant bureaucratic elites. In the 2014 election, the Arizonan’s basic message appears to have resonated  with the public. We are still a self-governing nation, and elections have consequences. For the new Congress, stopping bureaucratic lawlessness will be Job One.