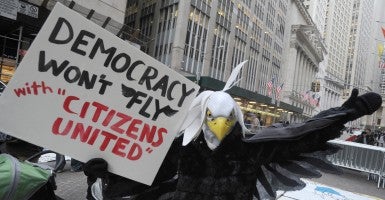 At almost the same time that protesters mad about the Citizens United decision were disrupting the start of the Supreme Court’s session on Wednesday, the White House issued a “Statement from the President” condemning the decision on its fifth anniversary. And once again, President Obama repeated the same false claim about “foreign corporations” that he made in his State of the Union speech back in 2010. This White House seems to believe that if you think up a good political attack theme, stick with it no matter what the truth is.

One can certainly debate the effect of Citizens United, which lifted the ban on independent political expenditures (i.e., independent political speech), and whether it has been beneficial to our democratic system. As a former member of the Federal Election Commission that enforces our campaign finance laws, I certainly disagree with the president’s view that “it has caused real harm to our democracy.” In fact, the decision simply restored First Amendment rights that had been abridged and has made our elections more competitive.

But what cannot be debated is Obama’s erroneous claim that the Supreme Court ruling allows foreign corporations “to spend unlimited amounts of money to influence our elections.” That is simply not true and will remain untrue no matter how many times the president says it – unless and until Congress changes the law.

The federal campaign statute (2 U.S.C. §441e) imposes an absolute ban not only on all ”foreign nationals” contributing directly to candidates for federal, state or local office, but also from “directly or indirectly” making an “independent expenditure” or disbursement of any kind to influence an election. A “foreign national” is defined in the law (22 U.S.C. §611(b)) to include foreign individuals, governments, political parties, partnerships, associations, corporations, or any other entity that is “organized under the laws of or having its principal place of business in a foreign country.”

The Federal Election Commission has issued a comprehensive regulation implementing this prohibition and enforces it vigorously. That regulation is geared towards preventing any foreign corporation or foreign national from getting around the ban by trying to flow money through an American subsidiary or conduit. That regulation (11 CFR §110.20) restates what the statute says: “A foreign national shall not, directly or indirectly, make any expenditure, independent expenditure, or disbursement, in connection with any Federal, State, or local election.” The prohibition extends to a foreign national even participating in the decisions made by an all-American organization:

“A foreign national shall not direct, dictate, control, or directly or indirectly participate in the decision-making process of any person, such as a corporation, labor organization, political committee , or political organization with regard to such person’s Federal or non-Federal election-related activities, such as decisions concerning the making of contributions, donations, expenditures, or disbursements in connection with elections for any Federal, State, or local office or decisions concerning the administration of a political committee.”

Most importantly (and relevant to Obama’s fallacious claim about foreign corporations), when the Supreme Court threw out the federal ban on independent expenditures by corporations and labor unions (labor unions are never mentioned by the president, just corporations), the Court specifically said that its decision in Citizens United did “not reach” the contribution and expenditure ban “preventing foreign individuals or associations from influencing our Nation’s political process.”

Five years after Citizens United, the ban on foreigners, whether individuals or corporations, being able “to spend unlimited amounts of money to influence our elections” remains in place. It has not been successfully challenged.

So why does the president keep making a claim that is obviously wrong under applicable federal law and FEC regulations? The only possible reason is that it makes a good sound bite that will influence the public. After all, no one wants “foreign money” influencing our elections. But that sound bite is totally false, and it does not benefit our democracy for the president to encourage that type of xenophobia about our elections.