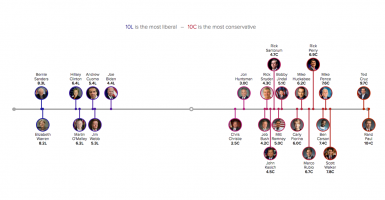 A screenshot from the 2016 Presidential Election page by Crowdpac.

A new political startup has studied the potential 2016 presidential field—and those who donate to them.

Researchers at Stanford University started Crowdpac, a website that not only analyzes a candidate’s voting record and statements but their history of political donations as well.

The founders of Crowdpac say that combining these factors provides a more accurate picture of a candidate’s true political philosophy, especially when some potential candidates (such as Carly Fiorina and Ben Carson) never have held office and thus have no voting record to judge.

They utilized an algorithm to examine the money each candidate gave and received.

“Our unique data model shows you where politicians stand on the issues, based on what they say, how they vote and who gives them money,” writes Crowdpac on its website.

“The whole point is to make it easier for people to get involved with politics,” Crowdpac CEO and co-founder Steven Hilton told CNN. “The way we do that is to give people simple, objective data about candidates and issues that cuts out the spin and the party positioning and gives people really clear, simple information that’s objective about where the candidates are on the issues.”

Crowdpac ranked each candidate by number. A score of “10L” is regarded as “most liberal,” 0 is a “centrist,” and “10C” is “most conservative.” Crowdpac also provides the methodology for each score, such as the types and number of votes and donors.

On the Republican side, Sen. Rand Paul, R-Ky., is the most conservative candidate, earning a score of 10.16C.

Paul spokesman Brian Darling told CNN that the Kentucky senator “has a very conservative outlook,” and that he was “happy to see his boss named most conservative.”

The most liberal candidate is Sen. Bernie Sanders, I-Vt., at 8.3L.

Sanders told CNN that he prefers the term “progressive” over “liberal,” but said he was considering a bid for the White House despite being “to the left of most of the country.”

“I think that there have not been enough voices out there, and I think there’s a reservoir out there of people who are angry at the establishment,” said Sanders.

After Sanders is Sen. Elizabeth Warren, D-Mass., at 8.2L and Hillary Clinton at 6.4L.

The most moderate Democrat is Vice President Joe Biden at 4.4L.

Crowdpac users can vote on which candidates they’d like to see run for president, monitor their favorite candidate’s poll average, and see how others have ranked their “presidential qualities.” They analyzed 24 likely Republican and Democrat contenders for the White House.

Crowdpac has also received permission from the Federal Election Commission to process campaign donations. Users can donate to their favorite candidate—before they’ve even declared their candidacy. Should the candidate run for president, Crowdpac will send them the donation. If they choose not to, it will be returned to the donor.