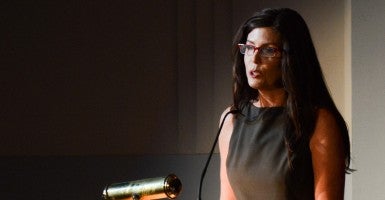 The Philadelphia Inquirer is reporting that a statewide grand jury has recommended criminal charges be filed against Pennsylvania Attorney General (and voter ID opponent) Kathleen Kane for perjury and contempt of court over the leaking of secret grand jury information.

Kane, a Democrat, had been in the news recently after a local grand jury convened by Philadelphia District Attorney Seth Williams indicted two Democratic state legislators for accepting bribes in exchange for voting against a voter ID bill after Kane refused to prosecute the case.  Kane had shut down the undercover sting investigation that caught state legislators from Philadelphia accepting cash bribes.

The statewide grand jury investigation, which is supervised by Judge William R. Carpenter, was approved by former Chief Justice Ronald D. Castille of the Pennsylvania Supreme Court.  Under normal circumstances, it is Kane’s office that presents cases to the statewide grand jury.  But because it was Kane herself who was being investigated, Judge Carpenter appointed a special prosecutor, Thomas E. Carluccio, a criminal defense lawyer and former prosecutor in Delaware.

Attorney General Kane had earlier questioned the competence of Fina in the undercover sting investigation against state legislators, using that as the reason to justify her refusal to proceed with the prosecution of the Democratic legislators who were recorded on video and audiotapes taking bribes.  She claimed that Fina’s behavior had “crippled the chance of this case succeeding in prosecution,” a claim that Philadelphia District Attorney Williams is proceeding to disprove with his grand jury indictments of those same legislators, who have, according to the grand jury’s report, admitted their guilt to the grand jury.

Apparently, Kane and her aides testified before the statewide grand jury and admitted that material from her office was provided to the Daily News, although she claimed it was not secret grand jury material.  Kane has hired former Clinton administration lawyer Lanny Davis to represent her, who said that the attorney general had “done nothing wrong or illegal.”

Kane was also sharply criticized by the report filed by the prior Philadelphia grand jury involved in the legislative bribe case, which accused her office of making “false” representations to the grand jury, as well as failing “to examine a wealth of internal documents – documents created by and in the possession of the [Office of the Attorney General] – that contradicted” her public claims and a formal report made to the grand jury about the undercover sting investigation.  That grand jury said her claim that the undercover sting was “racist” was “simply false.”  In fact, the grand jury said that Kane’s report “failed to include interviews of agents assigned to the investigation or others whose knowledge would have refuted the report’s preferred conclusion.”

Usually, a statewide grand jury’s recommendation would be turned over to the attorney general for action.  However, since the charges are against Kane, the grand jury’s recommendation has been turned over to Montgomery County District Attorney Risa Vetri Ferman for action, which puts her in the somewhat unusual position of being a local official deciding whether to indict a state official.

Even if Kane’s claims that she did not unlawfully release protected grand jury material are true, her admission that she provided information to the Daily News means that Kane was deliberately leaking information to hurt a former state prosecutor with whom she was having a public feud.  That leak also damaged the reputation of a private citizen, Whyatt Mondesire, who denounced the unfair damage to his reputation to the Philadelphia Inquirer.

This is on top of the prior findings of the Philadelphia grand jury that make it clear that Kane’s justification for ending the bribery investigation was false and that her office crafted a severely flawed report designed to support her claims that ignored the actual evidence in the bribery case.

State attorneys general are the chief law enforcement officials of their states, and must conform to the highest ethical and professional standards.  They must be dedicated to enforcing the law and pursuing justice in an objective, unbiased and transparent manner.   Creating false reports, leaking information to damage political opponents and not prosecuting public corruption is unacceptable behavior.  It does not conform to the standards the citizens of Pennsylvania have a right to demand from their state attorney general.