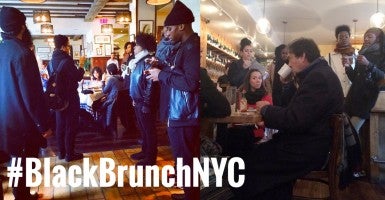 We interrupt your brunch time to let you know there is a war on Black lives. We will not stay silent. #BlackBrunchNYC pic.twitter.com/LeDDQeEKGB

Reaction to the unconventional demonstration locations was divided.

Some Twitter users rallied around the cause, mobilizing others to participate in the peaceful protests.

Which side are you on NYC? #blackbrunchnyc is demanding you stand up for Black lives. We outchea interrupting your Sunday brunch.   A video posted by Sharmin Hossain (@sharminultra) on Jan 1, 2015 at 8:21am PST

ATTN WHITE Man, I have no guilt disturbing your brunch. Its YOU that has no right to be here. #blackbrunchnyc pic.twitter.com/mFRq5Q9hbe

Others mocked the idea that interrupting a Sunday brunch would make a significant difference.

Give it to #blackbrunchnyc, they’re hitting the complacent bourgeoise right where it hurts

The demonstrations promoted the idea that brunching is a “white” activity and followed the narrative of “white privilege” — the idea that whites, especially white men, continue to have an advantage over other races and ethnicities.

Inside targeted restaurants, about 30 protesters sang and read the names of blacks killed by police, including Michael Brown, 18, in Ferguson, Mo., and Eric Garner, 43, in New York.

Some Twitter users were quick to point out that many of the Sunday brunchers probably were liberals who support the #BlackLivesMatter cause.

What I like most about #blackbrunchnyc interrupting the Sunday brunch of Manhattan libs is that most of those crackers voted for deBlasio!

Liberals protesting liberals. Not really sure what #blackbrunchnyc is trying to accomplish.

Others mocked the idea behind #BlackBrunchNYC, using sarcasm to poke fun at the demonstrators.

"What did you do in the race war grandpa?" "I made some white folk uncomfortable at brunch." #blackbrunchnyc

I thought all the #blackbrunchnyc was a new #diet by #moochelle. #tcot #gop #BlueLivesMatter pic.twitter.com/Pc2hpCsSF9

I tired this #blackbrunchnyc thing today, so I walk over to my employees and sat down on their laps, as they tried to enjoy their lunch.

#BlackBrunchNYC This reminds me of the time Rosa Parks sent back her Mimosa.

On a serious note, some social media users were upset over the timing of the protests coinciding with the funeral of Wenjian Lui, one of two NYPD officers shot dead in an ambush Dec. 20.

So while #OfficerLiu is being laid to rest, idiots are staging #blackbrunchnyc Anyone else see how horrifically disrespectful this is?

Others were upset with another demonstration across the country, where protesters disrupted an award ceremony for a 100-year-old World War II veteran in Portland, Ore., by shouting — in a reference to Garner’s death — “I can’t breathe, I can’t breathe.”