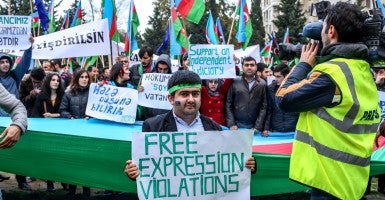 At a rally in November in Baku, Azerbaijan, people protested against violations of free expression. (Photo: Aziz Karimov/Pacific Press/Sipa USA/Newscom)

Authorities in Azerbaijan raided and closed the offices of a U.S.-funded radio station this weekend as government prosecutors in this Caucasus nation strengthened their crackdown on journalists and nongovernmental organizations.

On Friday, prosecutors and the police raided the offices of the station—called Radio Azadliq, which in English translates to “liberty”—in Baku, the nation’s capital.

Employees were detained as officials seized computers, flash drives, documents and other materials, before sealing the premises.

On Saturday night, the authorities began arresting employees of the radio station, in some cases taking them from their homes.

One of few independent media in Azerbaijan, Radio Azadliq is part of the Radio Free Europe/Radio Liberty network.

Based in Prague and funded by the U.S Congress, Radio Free Europe broadcasts to 21 countries across Eastern Europe, Central Asia and the Middle East.

Radio Free Europe was founded in 1953, during the Cold War, as a means to counter Soviet propaganda.

The Baku station opened in the 1990s.

The raid is a “flagrant violation of every international commitment and standard Azerbaijan has pledged to uphold,” says the editor-in-chief of @RFERL.

In a statement, Radio Free Europe editor-in-chief and co-CEO Nenad Pejic condemned the raid of the Baku office as a “flagrant violation of every international commitment and standard Azerbaijan has pledged to uphold.”

“The order comes from the top as retaliation for our reporting and as a thuggish effort to silence [Radio Free Europe]. This is not the first time that a regime has sought to silence us, and we will continue our work to support Azeris’ basic right of free access to information and to report the news to audiences that need it.”

The government of Azerbaijan President Ilham Aliyev has a history of stifling dissent.

In a controversial election, Aliyev, 53, came to power after the death of his father, Heydar, a former KGB officer known to rule with an iron fist.

Though it is not a member of the European Union, Azerbaijan has tried to bolster its international standing.

In June, the nation will play host to the first-ever European Games.