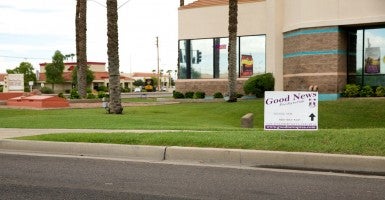 Don't show us a sign: This town strictly limits signs designed to attract visitors to a small church.

A small church relies on temporary signs to invite and direct worshipers to its services. However practical, the pastor’s goal ran up against a town’s strict limitations on the size of signs, the number that can be posted and for how long.

The town officials of Gilbert, Ariz., however, don’t impose those same restrictions on political and ideological messages or on signs put up by homeowner associations.

On one hand, it’s a small-town dispute over signage. On the other, the squabble raises a concerning question: Does government have the right to censor the type of content citizens promote?

That question warrants the attention of the U.S. Supreme Court, in the case of Reed v. Town of Gilbert.

Reed must adhere to Gilbert’s sign regulations, which the town says were designed to promote “optimum conditions for serving sign owners’ needs and respecting their rights to identification while balancing the aesthetic interests of the community.”

The town of Gilbert, Ariz., doesn’t impose the same restrictions on residents posting political signs as it does on Pastor Clyde Reed and his Good News Presbyterian Church.

Under the town’s sign code, residents can post an unlimited number of political signs up to 32 square feet in size. Signs with ideological messages can be up to 20 square feet, displayed indefinitely and unlimited in number.

The church’s signs, along with signs for other non-profit, event-related activities can be only six square feet in size, displayed for no more than 14 hours and are limited to four per property.

The town says it intended these restrictions to provide churches and other non-profits with a reasonable window to direct the community to and from their events.

But for Reed, the limitations mean he can’t begin advertising a 10 a.m. service until 8 p.m. the night before. By then, it’s dark, and the chances of residents seeing his signs are slim.

Reed’s lawyer, David Cortman, is affiliated with Alliance Defending Freedom, an organization that seeks to protect the religious rights of individuals. Cortman says the town’s sign code is a form of discrimination that allows the government to decide what speech is more valuable and thus granted greater protection under the First Amendment.

“Speech discrimination is speech discrimination,” Cortman says in a press release on the case. “The government shouldn’t be permitted to place severe restrictions on religious speech while allowing greater exposure for the speech of others in similar circumstances.”

In a phone interview with The Daily Signal, Michael Hamblin, a lawyer for the town of Gilbert, dismisses the accusation. Hamblin says the town’s restrictions don’t violate the First Amendment, pointing to a key difference:

Political signs are allowed to be in the right-of-way longer, and that’s by state law. Those are encouraging people to vote. This sign is not general advertising; it’s directions for a particular event.

Cortman will make oral arguments for Reed and his church before the Supreme Court, Jan. 12, in Washington, D.C.