Why Is the Federal Government Doling Out Billions to the Wind Industry? 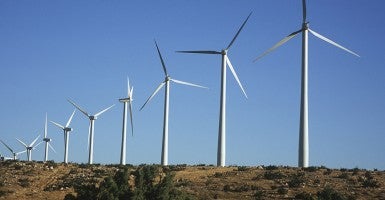 A generous taxpayer-funded handout for the wind industry expired at the end of 2013—but it’s not going to the grave quietly.

Congress could give the handout new life. Currently, Congress is tossing around the idea of a one-year or multi-year extension of the wind production tax credit.

That’s a mistake. Policymakers should not breathe any life into the wind production tax credit because the policy is bad for taxpayers, the economy and perversely, it’s even bad for the long-term growth of the wind industry.

You’ve heard it all before. Just do a simple search for production tax credit expiration with different years and you’ll read the same tired arguments about how the handout is good for the economy and a sustainable industry.

It’s like using taxpayer dollars to pay LeBron James to work at McDonald’s when he’s clearly more valuable in another sector of the economy: basketball!

Proponents of the wind tax credit argue that without an extension jobs will be lost.  They point to the fact that when Congress allowed the credit to expire in years past, production declined 93, 77 and 73 percent respectively the year following the credit’s lapse.

But that’s not a sign of economic loss. Instead, it’s a sign of industry dependence on the federal government and the credit creating a bigger market than otherwise would exist.

By subsidizing a huge portion of the wind industry’s production, federal handouts siphon money from American taxpayers and resources that could be put to a higher valued use. With enough taxpayer dollars, the U.S. government can prop up just about any industry, but that does not mean those jobs are adding value and growing the economy. Doing so shifts labor and capital away from other, more productive sectors of the economy and towards the politically preferred ones.

It’s like using taxpayer dollars to pay LeBron James to work at McDonald’s when he’s clearly more valuable in another sector of the economy: basketball!  Or more aptly, it’s like taxpayers paying a line cook millions to play in the NBA.

Congress is talking about billions of dollars–$6.4 billion for a one-year extension of the credit over the 10 years the industry receives the windfall, according to the Joint Committee on Taxation–for an industry to produce intermittent, expensive electricity when America already has a robust, diverse supply of energy to power homes and businesses.

Furthermore, the wind credit merely concentrates benefits to the states where the wind blows and to the states that mandate renewable energy consumption and disperses the costs to the rest of America. Sure, there are a few winning states,  but there are a lot more on the losing end of this deal.

Lobbyists, politicians and other beneficiaries of the wind credit lament that the debates over the extension create uncertainty for businesses. But the uncertainty is their fault: It’s a result of the industry’s dependence and perpetual begging for an extension.  If the begging had stopped the first time officials pleaded they needed only a few more years to be cost-competitive, this conversation would have been over two decades ago. American for Prosperity’s Tim Phillips points out that a former Worldwatch Institute president said in 1984 that “Tax credits have been essential to the economic viability of wind farms so far, but will not be needed within a few years.”

In 2011, 750 businesses asked for just a one-year extension. Yet as the end of the year rolls around, these businesses, politicians and lobbyists suffer from political amnesia.  It’s back to the taxpayer-funded trough begging for more.

Most perverse, though, is that the industry is begging for a short-term solution that works to the detriment of the long-term growth of the industry.  Even some in the industry understand that dependence on the taxpayer reduces the incentive to innovate and compete in the market. Patrick Jenevein, CEO of the clean energy firm TangEnergy Group, gets it, saying, “Government subsidies to new wind farms have only made the industry less focused on reducing costs. In turn, the industry produces a product that isn’t as efficient or cheap as it might be if we focused less on working the political system and more on research and development.”

Congress has played this game for more than 20 years. It’s time to put the wind tax credit to bed, once and for all.