The Ethanol Mandate Proves the Government Is a Poor Central Planner 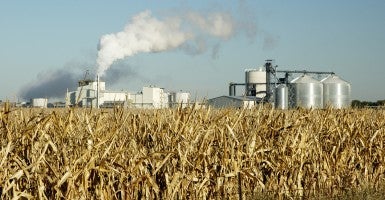 The federal government’s mandate to require Americans to use expensive, inefficient biofuels is so broken and dysfunctional it can’t even decide the ideal target amount of production.

On Friday, the Environmental Protection Agency again announced that it would not determine the amount of ethanol and biofuels required to be mixed into every American’s fuel tank for 2014 by the Energy Independence and Security Act. In 2005, Congress mandated that alternative fuels, primarily corn-based ethanol, progressively be added to gasoline and diesel and that the EPA annually adjust the targets originally set by Congress as needed. Now that 2014 is almost over, the EPA has failed again to clarify the standards. Friday’s non-decision should remind us again of some of the reasons why it’s high time Congress repeal what some have accurately labeled a “Soviet-style production quota system” for the nation’s fuel supply.

1. The Renewable Fuel Standard hurts drivers, eaters, taxpayers and the environment. Because of the RFS, Americans have to pay more for fuel than they normally would without the mandate, and the fuel they put in their tanks is less energy efficient because ethanol isn’t as energy dense. Further, the increased demand for corn for use in ethanol increases the price of corn by as much as 68 percent, which affects not only Americans but the world, because corn is a staple food in many countries as well as a staple feed for livestock. In addition, ethanol has proven to be harmful to smaller engines.

Although environmental organizations initially supported the mandate to reduce oil use and greenhouse gas emissions, many now argue that the ethanol mandate is poor environmental policy. When radical environmentalists and free-market groups, the UN, motorcyclists, ranchers, anti-poverty groups, restaurants and others agree on something, maybe it’s time to listen.

2. The system is broken and full of uncertainty. The EPA was supposed to have published a proposed set of standards in September 2013 and finalized in November so that industry/refineries could plan for the following year. Through a series of delays and extensions, the final standards came out only last week.

Imagine if a teacher required students to regularly turn in homework and take tests but told students the grading scale hadn’t been determined yet. Imagine further that while the teacher promised to produce the grading scale before school started, she hadn’t yet developed it with two months of school left to go. Parents would be up in arms and students would be worried that their efforts might not have been enough and would cost them dearly. The teacher would rightly be fired.

But Congress continues to let a similar “teacher”—the EPA—carry on with a broken system which Congress itself created. Those in favor of the mandate are quick to say it creates “market certainty.” It’s hard to see how that is the case.

3. Unmet targets indicate why the federal government is a poor central planner. In fact, some targets have been missed by a long shot. The EPA routinely has had to keep cellulosic biofuel targets well below what Congress stipulated because the technology to turn corn refuse into fuel isn’t economically viable. Congress’s target for 2013 was to have 1 billion gallons in the nation’s fuel supply; in its 2013 revised target the EPA only mandated 6 million—less than 1 percent of the original target.

On the other hand, there is “too much” ethanol. Congress anticipated Americans would be driving a lot more than they are. In addition, because older or smaller vehicles can safely handle only a certain proportion of ethanol, we have run up against what some call a “blend wall” where the market has no outlet for more ethanol. When not enough of the cellulosic ethanol is produced, the EPA fines refineries and when there is the potential for too much ethanol or biodiesel, the EPA stamps down demand.

4. Only politically connected groups benefit from the RFS. A handful of organizations stand to benefit from the RFS such as corn and soybean growers, ethanol refiners, plant-based ethanol producers, and the politicians who get their votes. In fact, it appears that the string of delays for the 2014 standards occurred because the agriculture and ethanol lobbying arms were unhappy that the EPA originally proposed to cut the ethanol requirement for the first time in the mandate’s existence. But the RFS is a clear case of concentrated benefits to a handful of connected industries at the expense of the rest of America and the environment.

To make matters worse, the mandate stifles competition and growth in the alternative fuels industry. Instead of relying on a process that rewards competition and innovation, the mandate guarantees a market for the ethanol producers’ product and prevents the industry from achieving the price point at which the technology will be economically viable. When the government plays favorites, it traps valuable resources in unproductive places.

The path forward to remove favoritism and provide market opportunities for competition and innovation is to remove those policies that create those incentive structures. Congress should repeal the Renewable Fuel Standard.