Amid Crises, Obama Pushes Out Hagel as Defense Secretary 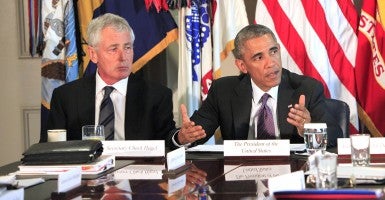 Defense Secretary Chuck Hagel resigned today after less than two years in the post amid the struggles of President Obama’s national security team to respond to a slew of global crises.

Hagel, the only Republican in Obama’s Cabinet, is widely believed to have been pushed out by the president as he seeks a different approach to enduring challenges such as the Islamic State terrorist group and the deadly Ebola virus.

Hagel, 68, a low-key former U.S. senator from Nebraska and combat veteran of the Vietnam War, had been skeptical about the Iraq War. He endured a brutal confirmation process in the Senate, where critics questioned his familiarity with the issues, to get the top Pentagon job.

>>> Commentary: Chuck Hagel Learned to Love the Bomb. Will His Successor?

Hagel came in with the assignment from Obama to manage the withdrawal of American troops from Afghanistan and to lead a significant paring of the military budget.

In an awkward announcement of his departure shortly after 11 a.m. from the White House’s State Dining Room, Obama, with Hagel and a sullen-looking Vice President Joe Biden flanking him, thanked Hagel for providing a “steady hand” and “bolstering America’s leadership in the world.”

Obama, listing what he called accomplishments on Hagel’s watch, said it was the “appropriate time” for Hagel to go.

After Hagel’s own gracious but general remarks, the president initiated a hug with the man he called a close friend and adviser.

He called his tenure the “greatest privilege” of his life and vowed to stay on and work “just as hard every moment” until the Senate confirms his successor.

Such politeness and deference may have been Hagel’s undoing, some argue.

Hagel and Obama shared mutual opposition to the Iraq War from their former perches on the Senate Foreign Relations Committee. Obama noted his gratitude that his Republican colleague had accompanied him on a trip to Afghanistan after he won the Democratic presidential nomination in 2008.

“This news is unsurprising,” said Steve Bucci, a foreign and national security policy expert at The Heritage Foundation who is a former top Pentagon official and Army Special Forces officer. Bucci, calling the forced resignation a “diversion,” told The Daily Signal:

Hagel never really had the skills for the position; he was put in place solely to provide cover for the budget slashing at the Department of Defense. By kicking him to the side of the road, Obama loses nothing, save a timid voice who was just starting to point out that the president’s Iraq/Syria policy was not working. The foreign and defense policy failure is the president’s, and firing Hagel is nothing more than a diversion, the equivalent of saying, ‘Ignore that man behind the curtain.

Michael O’Hanlon, director of research for the foreign policy program at Brookings Institution, agrees that Hagel was made a scapegoat by Obama.

In an interview with The Daily Signal, O’Hanlon, who specializes in U.S. defense strategy, said Hagel has done a better job than critics say.

“Hagel has done a good job with the Asia re-balance, and the administration was right with Russia and Ukraine to use diplomacy and sanctions rather than military involvement,” O’Hanlon said. “It’s not a DOD problem.”

But Hagel had struggled to articulate the administration’s strategy to counter the rise of the Islamic State, the brutal terrorist group also known as ISIS or ISIL, and fought with the White House’s National Security Council over how to best deal with Syria’s three-year civil war.

Hagel recently sent a memo to Rice arguing for more clarity on how to confront Syrian President Bashar Assad.

The White House is carrying out out a limited military role in Syria focused on combating ISIS —  and not on removing the dictator Assad from office.

Dempsey, as chairman of the Joint Chiefs, seemingly grabbed the spotlight from Hagel in recent months by frequently making public comments about the possible need to send U.S. ground troops to fight ISIS.

Obama has resisted that possibility.

Sen. John McCain, R-Ariz., a friend and critic of Hagel’s, hinted at heavy-handedness in Obama’s approach to foreign affairs and defense policy as a reason for the broken partnership. In a statement, McCain said:

I know that Chuck was frustrated with aspects of the administration’s national security policy and decision-making process. His predecessors have spoken about the excessive micro-management they faced from the White House and how that made it more difficult to do their jobs successfully. Chuck’s situation was no different.

O’Hanlon contends that Obama’s approach to decision-making is fine. It’s just that the president has made some bad decisions in the Middle East:

“I don’t think relationships are necessarily poor,”  O’Hanlon said, commenting on the theory that Obama has thorny relations with Hagel and others in his Cabinet. He added:

The president is supposed to make big decisions. It’s just that in this part of the world, he has made some incorrect decisions. He wanted to end those wars and it is within his rights to make those decisions. I don’t buy the micromanaging theory.

>>> Commentary: Hagel Learned to Love the Bomb. Will His Successor?

“All three command tremendous respect in that region,” O’Hanlon said.

Obama should keep in mind that Hagel’s successor will have to be flexible in confronting the challenge of the Middle East, the Brookings expert said:

He should be looking for someone with tremendous experience who has realism and creativity when it comes to the Middle East. That person needs to anticipate things and to know that whatever you try may go wrong.

But Bucci argues that the next defense secretary might not hold much weight in carrying out Obama’s defense policy.

“He needs to pick someone who is competent and has the spine to stand up to the president,” Bucci said. “But whoever he puts in there won’t have an ability to make a lot of difference.”