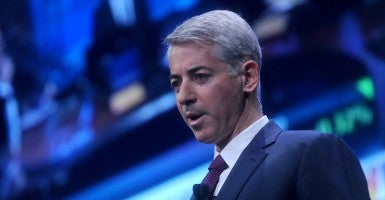 He was, in other words, betting that Herbalife would fail.

Hoping to persuade investors to bail on the company’s stock, he has repeated the claim he made then — that Herbalife unfairly targets the poor, and especially Latinos, in what he calls “the best-managed pyramid scheme in the history of the world.”

But two years on, Ackman’s high-profile multimedia battle apparently has failed — and even backfired. He recently admitted that another glossy presentation, in July, inadvertently set off a rise in Herbalife’s stock.

Many would give up. But not William Ackman.

In his crusade against Herbalife, Ackman lately has taken the fight for hearts and minds to a place where the minds can be a little smaller: Capitol Hill.

Through several K Street lobbying firms, Ackman has reached out to Democrats, especially those in the Latino caucus. His goal: To get those Democrats to use the threat of a Federal Trade Commission investigation to accomplish what Ackman’s high-powered media campaign and the marketplace could not – the takedown of an entire company.

This is the danger of a government that is almost limitless in its power and reach. It gives private actors the incentive to use government influence to manipulate the marketplace.

Ackman says he won’t profit from his Wall Street play. He has called the nutrition-maker’s profits “blood money” and said he would give any profits from this to charity.

Disclosures from all four firms use the same language to describe the subject of their meetings on Capitol Hill: “Issues relating to enforcement of consumer protection laws and securities regulations relating to pyramid schemes.”

Josh Kaib is a reporter for Watchdog.org, a national network of investigative reporters covering waste, fraud and abuse in government. Watchdog.org is a project of the nonprofit Franklin Center for Government & Public Integrity.

Will Swaim is a reporter for Watchdog.org, a national network of investigative reporters covering waste, fraud and abuse in government. Watchdog.org is a project of the nonprofit Franklin Center for Government & Public Integrity.