Study: Competition from Uber and Lyft Helps the Poor 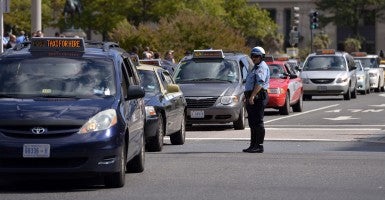 Taxis attend a strike and demonstration protesting against new rules that will allow app-based services such as UberX, Lyft and Sidecar to operate in D.C. (Photo: Xinhua/Yin Bogu/Newscom)

Low fares of competing taxi and ridesharing services mean better service for low-income communities, according to a study published Tuesday.

Taxi regulations are commonly cited as a means to protect consumers from high prices, but a  new report by the Mercatus Center at George Mason University challenges that assumption, arguing regulations and the price of taxi licenses, or medallions, artificially keeps prices high and discourages new entrepreneurs from entering the market.

“By increasing the number of vehicles in operation, deregulation forces companies to expand service into new areas, and with little to no increase in rates,” write the study’s authors, Stewart Dompe and Adam C. Smith.

“Under regulation, firms had more customers than capacity and could pick and choose their fares. Unscrupulous drivers could ignore certain individuals and neighborhoods and be certain they would find customers elsewhere,” write Dompe and Smith.

“But deregulation increases the opportunity cost of turning down a fare. Now, a driver may not be able to afford to ignore a request,” they write, “This is why, in practice, Uber and Lyft fares have remained fairly uniform.”

The competition between ridesharing companies such as Uber and Lyft, which enable both riders and drivers to rate their experiences through a smartphone app the customer uses to order rides, and locally entrenched taxi cab services has led to legal battles across the country.