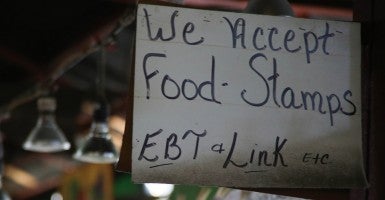 Next spring, thousands could be cut from Indiana’s Supplemental Nutrition Assistance Program.

Indiana has previously waived the federal requirement that SNAP recipients are either employed, actively seeking employment or in training for future employment.

But now the Indiana Family and Social Services Administration has announced that, as of 2015, the federal requirement will be enforced and as a result, approximately 65,000 people will be cut from the program.

According to Fox 59 in Indianapolis, Indiana’s new requirement mandates that “any able-bodied Indiana adult without children will need to be working at least 20 hours a week, be in job training, or searching for employment in order to qualify.”

Even in good economic times, work rates are low among able-bodied adults on food stamps. About half of food stamp households that include an able-bodied adult perform zero hours of work. Lifting the waiver would mean that able-bodied adults without dependents would be limited to three months of food stamps unless they are working or participating in some type of work program at least 20 hours a week. A work requirement encourages self-sufficiency for those who are able and also helps ensure that benefits are going to those most in need.

“I support the idea if it’s incentivizing people to go back to work,” said Merritt.

John Whitaker, the executive director at the Midwest Food Bank in Indianapolis, told Fox 59 that one in six Indiana residents uses a food bank or pantry, and that he is concerned about the potential for this demand to increase once current SNAP recipients are cut.

“Sixty-five thousand people would equate to about what it would take to fill Lucas Oil Stadium for a really good game,” said Whitaker.