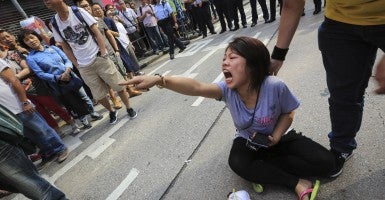 A pro-democracy protester in the Mongkok district of Hong Kong. (Photo: Guillaume Payen/NurPhoto/Newscom)

Start of the First Opium War between China and Great Britain. Although some historians and figures at the time, including our sixth president John Quincy Adams, believed this war was over free trade, it has always been China’s position that it was unfairly waged over the right to let Britain sell opium in China. Canton Commissioner Lin Tse-Hsu wrote to 19-year-old Queen Victoria, “Let us ask, where is your conscience? I have heard that the smoking of opium is very strictly forbidden by your country; that is because the harm caused by opium is clearly understood. Since it is not permitted to do harm to your own country, then even less should you let it be passed on to the harm of other countries—how much less to China!”

The British flag is hoisted for first time over Hong Kong Island by hundreds of Britons who had been chased out of first Canton and then the Portuguese colony of Macau. The island has one of the best deep-water natural harbors but was inhabited only by a few fishermen. Lord Palmerston was dismissive, writing to the leader of the expedition, “You have obtained the Cession of Hong Kong, a barren island with hardly a house on it … It seems obvious that Hong Kong will not be a Mart of trade.”

Hong Kong becomes war booty and a British colony in the Treaty of Nanking that ends the war, in which China agrees to officially cede Hong Kong Island and to open five ports to foreign trade: Amoy, Foochow, Ningpo, Shanghai, and Canton. China sees the treaty as the first of a series of humiliating “Unequal Treaties” that an increasingly weak China was forced to sign with Western powers and Japan, whom Beijing had always considered to be “barbarians.”

Britain acquires the Kowloon Peninsula on the mainland north of Hong Kong Island in the First Convention of Peking, which ends the Second Opium War (1856-1860) and is also regarded by China as among the humiliating Unequal Treaties.

China leases a Kowloon hinterland known as the New Territories to Britain, which becomes effective on July 1 to run for 99 years. The populated Hong Kong Island and Kowloon Peninsula and the more rural New Territories comprise the territory known as Hong Kong to this day.

Britain surrenders Hong Kong to invading Japanese troops after days of street fighting that had started with air raids one day after Pearl Harbor. The colony was valiantly defended by regular British troops, along with Scottish, Portuguese, and Chinese companies and Hong Kong volunteers. The Japanese occupation lasted three years and eight months, and ended with Japan’s surrender on VJ-Day.

After 22 years of civil war in mainland China between the nationalists (Kuo Min-Tang, or KMT) and the Communists, the latter win. Their leader, Mao Tse-Tung, proclaims the start of the People’s Republic of China (China’s official name to this day) from Peking’s Tiananmen Square. A brain drain from China’s main financial city, Shanghai, benefits Hong Kong, as 1.4 million enterprising Shanghainese emigrate to Hong Kong, “an exile of Chinese capitalism to Hong Kong,” according to Ming Chan of the Hoover Institution.

The brilliant Scottish economist Sir John Cowperthwaite is appointed financial secretary of Hong Kong, a post he holds for a decade, during which the governors he served under let him implement classically liberal economic policies. Sir John ignored increasingly socialist edicts from London and set his own course. In his obituary after his death at the age of 90 on January 21, 2006, the London Telegraph said:

His achievement in Hong Kong was hailed by Milton Friedman and other free-market economists as a shining example of the potency of laissez-faire when carried through to its logical conclusions in almost every aspect of government … Personal taxes were kept at a maximum of 15 per cent; government borrowing was wholly unacceptable; there were no tariffs or subsidies. Red tape was so reduced that a new company could be registered with a one-page form.

Even the left-wing Guardian newspaper had to recognize that when Sir John took over, the average Hong Kong resident had earned a quarter of what the average Briton earned. By the early 1990s, the average Hong Konger earned more than a Briton. Under Sir John began the stark contrast between successful, capitalist Hong Kong on one side and on the other the socialist colonial power and Communist mainland.

With the expiration of the 99-year lease over the New Territories approaching, British Prime Minister Margaret Thatcher lands in Beijing (formerly Peking) to negotiate the future of the colony. Thatcher’s opening position, that China may regain sovereignty over all of Hong Kong but that it would be in everyone’s interest if Great Britain retained administration of the colony, is rejected out of hand by the Chinese Communist leadership, which had nurtured grievances over the Unequal Treaties at least as much as their dynastic predecessors.

Supreme leader Deng Xiaoping told Thatcher that China “cannot but resume the exercise of sovereignty over the whole of the Hong Kong area in 1997.” Deng proposes the “one country, two systems” formula he had earlier elaborated for Taiwan, under which Hong Kong would retain its freedoms. The majority of Hong Kongers—82 percent, according to one local poll at the time—preferred to have remained under the rule of a democratic colonial power than to come under Communist rule, but Hong Kong was indefensible and received most of its water from Guangdong Province (formerly Canton).

Britain and China initial the Joint Declaration, an international treaty registered at the United Nations, in which China announces it has “decided to resume the exercise of sovereignty over Hong Kong” on July 1, 1997 and agrees to respect Hong Kong’s freedoms of speech, religion, speech, association, an independent judiciary, etc.—all rights it denied to the more than 1 billion Chinese who then lived under Communist rule in China proper. Under the Joint Declaration, Hong Kong would enjoy “a high degree of autonomy” in all matters except defense and foreign affairs.

People’s Liberation Army troops brought in from the provinces massacre hundreds, if not thousands, of peaceful pro-democracy protests in Beijing, awakening the people in Hong Kong about the nature of the regime about to take them over. A movement is born in Hong Kong, which demands that Britain grant Hong Kong democracy before the anticipated 1997 handover to China.

The National People’s Congress—China’s rubberstamp, unelected parliament—passes the Basic Law, Hong Kong’s mini-constitution after four years of drafting, with little genuine democratic input from the people of Hong Kong. It promises again that the people of Hong Kong would have all the rights the Joint Declaration promised.

The U.S. Congress passes the Hong Kong Policy Act, which holds, “Support for democratization is a fundamental principle of United States foreign policy. As such, it naturally applies to United States policy toward Hong Kong.… The human rights of the people of Hong Kong are of great importance to the United States and are directly relevant to United States interests in Hong Kong. A fully successful transition in the exercise of sovereignty over Hong Kong must safeguard human rights in and of themselves.” The act remains in effect.

The British appoint former Member of Parliament Chris Patten as the twenty-eighth and last governor of Hong Kong, and he begins to recognize the democratic rights of the 6.8 million people in the colony. His actions immediately incur the wrath of China, whose senior officials begin to refer to him as the “Whore of the East.”

China’s senior official for Hong Kong Lu Ping tells People’s Daily that the universal suffrage method for electing Hong Kong’s chief executive, who would replace the post of governor, “should be reported to [China’s Parliament] for the record, whereas the central government’s agreement is not necessary. How Hong Kong develops its democracy is completely within the sphere of the autonomy of Hong Kong. The central government will not interfere.”

The Heritage Foundation picks Hong Kong as the world’s freest economy in its Index of Economic Freedom, a sign that Sir John’s policies are still alive in the colony. Hong Kong holds first place in each of the 19 subsequent indexes.

Hong Kong holds its last Legislative Council election under British rule, expanding the number of directly elected members of the LegCo, a system which nets the pro-democracy parties 12 seats and the pro-Beijing parties one seat. China rejects the expanded franchise and sets up an alternative, Beijing-selected legislature across the border in Shenzhen.

China assumes sovereignty over Hong Kong. What was a “barren island” in 1841 is now a thriving financial metropolis whose citizens in 2012 had a gross domestic product per capita of $37,000, four times that of China.

The Standing Committee of the National People’s Congress adopts a decision that rules out universal suffrage for the selection of the 2012 chief executive, but says the 2017 election “may be implemented by the method of universal suffrage.”

Close to 100,000 Hong Kongers march to protest the mainland’s attempted introduction of a curriculum which praises the Communist Party and compares it positively with America’s democratic system, which it chides for its gridlock and partisan debate. The curriculum is withdrawn.

China releases its first ever “white paper” for China, which asserted “comprehensive jurisdiction” over Hong Kong, and demands that any chief executive elected in 2014 must “love” China—a subjective criteria Beijing will decide.

China hands down its decision on the 2017 election of the chief executive: he or she will be elected by universal suffrage, yes, but only among candidates selected by a “nominating committee”—essentially the same committee comprised mostly of pro-Beijing individuals who have chosen previous chief executives—and subject to final “appointment” by Beijing. This decision sets the stage for the student-led demonstrations of this past week, in which tens of thousands of marchers have demanded real democracy.