Why Iraq’s Chemical Weapons Are a Lingering Threat 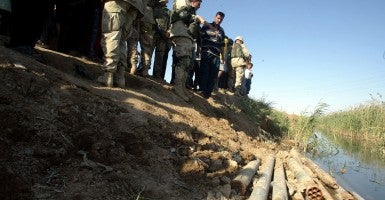 It essentially gives a free pass to Saddam Hussein’s Iraqi regime, which built the illegal weapons, used them against Iran and its own Kurdish opposition and failed to destroy them as required by numerous U.N. Security Council resolutions.

Qadhafi never surrendered all of his chemical weapons, as required under a 2004 agreement. Neither did Assad, who doubled down and continued to launch chlorine gas attacks after negotiating a 2013 disarmament accord with the Obama Administration that was lauded by the New York Times.

To make matters worse, the Assad regime may not be the only criminal gang using chemical weapons inside Syria. The Islamic State (also known as ISIS or ISIL) reportedly also has used the banned weapons in its offensive to conquer the city of Kobane. In July, three Kurdish fighters were killed by what appeared to be a blister agent that left burns and white marks on their skin.

There also are unconfirmed reports of the Islamic State launching chlorine gas attacks in Iraq.

The unsettling prospect that the Islamic State has acquired such terrible weapons adds increased urgency to the mission of defeating that fanatic movement.

But that wasn’t the take-away the New York Times focused on its news and commentary coverage.

You might have expected it to focus on Saddam Hussein’s duplicity and failure to fulfill his legal obligation to destroy his chemical weapons, as the Bush Administration charged before the 2003 Iraq war.

But you would be wrong.

The article instead focused on an alleged cover-up by the U.S. government of injuries sustained by American and Iraqi personnel exposed to the chemical munitions and a failure to provide adequate medical treatment after they were exposed.

A related New York Times editorial argued that “These weapons are not the chemical and biological weapons of mass destruction that the George W. Bush administration claimed as the excuse for embarking on the Iraq war and that, it turned out, did not exist.”

Never mind that the recovery of more than 4,500 chemical munitions provided additional proof that Saddam Hussein’s regime did not comply with its disarmament obligations after the 1991 Gulf War or with numerous U.N. Security Council resolutions requiring it to prove to U.N. inspectors that it had destroyed all of its chemical weapons.

These are the facts that matter—not what the New York Times chose to highlight.