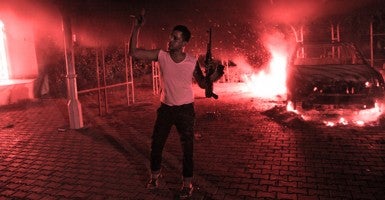 An armed man waves his rifle as buildings and cars are engulfed in flames after being set on fire inside the US consulate compound in Benghazi late on September 11, 2012. (Photo: AFP/Newscom)

We’re about to learn a lot more about the extent of the terrorist plot behind the attack on the U.S. diplomatic facility in Benghazi.

On Tuesday, a grand jury in Washington, D.C., handed down 17 new charges against Abu Ahmed Khattalah, so far the only man arrested in the murders of the four Americans in the facility that night, including U.S. Ambassador to Libya Christopher Stephens. Khattalah, who was arrested in June and arraigned in July, could face the death penalty if convicted.

According to The Washington Times, the charges confirm what was clear to most of the U.S. government—from the State Department to the Pentagon to the CIA on the ground in Libya—that the attackers who destroyed the U.S. constulate in Benghazi on Sept. 11, 2012, were well-orchestrated and well-armed and were led by a man with a clear mission in mind.

And still President Obama, Secretary of State Hillary Clinton and U.N. Ambassador Susan Rice insisted the attack was a demonstration turned violent, a reaction to an anti-Muslim video. “What difference, at this point, does it make?” Clinton yelled intemperately at senators during a testy hearing in January, 2013, “whether it was a terrorist attack or four guys out for an evening walk?” An evening walk this certainly was not.

The arraignment, scheduled for next week, will highlight that difference. The suspect is accused of being the leader of a terrorist affiliate of Ansar al Shariah and the mastermind behind the attack on the consulate. Khattalah, according to court documents, thought the U.S. Benghazi diplomatic post to be a CIA intelligence-gathering facility, and he wanted to destroy it and get the Americans out of the city.

Khattalah has claimed that he was on the scene of the attack at 11.45 p.m. to help direct traffic. But witnesses have placed him at the scene as the mastermind. Considering this is the U.S. government’s case and that Khattalah is not just any terrorist, we are left to wonder why he was allowed to remain free, even giving interviews to U.S. news organizations for more than a year. Also, why did it take the FBI months to get into Benghazi to search the ruined consulate? It will be up to the Benghazi Select Committee to get the answers.

Capturing Khattalah was important, as will be his trial. But through its delayed response and its apologies to Muslims for an ultimately irrelevant video, the Obama administration left an impression of weakness among terrorist groups in the Middle East. In Iraq and Syria, today, we are watching the consequences of that perception unfold.