Gonzalez: Conservatives Must Not Allow Illegal Immigration Issue to Dominate Dialogue With Hispanics 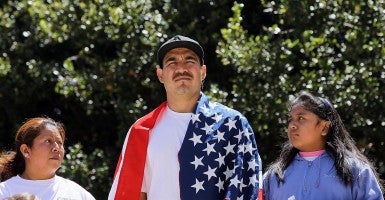 How can conservatives break the liberal monopoly on Hispanic Americans? (Photo: Getty Images)

Mike Gonzalez, a senior fellow at The Heritage Foundation, warned Friday that conservatives must speak to Hispanics about issues besides illegal immigration.

Gonzalez spoke to a Heritage Foundation audience about how he wanted to write a “wake-up call” for conservatives.

“We cannot allow illegal immigration to monopolize how we talk about and to Hispanics,” said Gonzalez. “All we say on Hispanics is on this issue. There are a lot of other issues that need to be addressed.”

Furthermore, he noted that “a significant portion of illegal immigrants are not Hispanic.”

Gonzalez joined Jim Geraghty of National Review Online for a panel discussion about his new book “A Race for the Future: How Conservatives Can Break the Liberal Monopoly on Hispanic Americans.”

Former senator and Heritage Foundation President Jim DeMint introduced the panel, praising Gonzalez’s book. DeMint said he was “struck by the simplicity of what we need to do as conservatives, as Americans” on this issue.”

Gonzalez said that if conservatives can make clear to Hispanics what conservatism really is, they would like it.

Gonzalez lamented the cultural divide he said the Left has imposed on America:

Gonzalez made clear that it is necessary to not only reach out to progressives and liberals, but to see past party lines.