How to Wage a Better (Information) War Against Terrorism 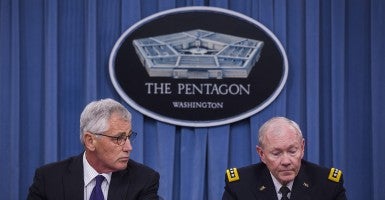 Secretary of Defense Chuck Hagel and Chairman of the Joint Chiefs of Staff Gen. Martin E. Dempsey speak at a press conference at the Pentagon. (Photo: Newscom)

Defeating ISIS “requires the application of all the tools of national power–diplomatic, economic, information, military,” stated Martin Dempsey, chairman of the Joint Chiefs of Staff, at a Pentagon news conference on Aug. 21.

For Rick Stengel, who took over six months ago as undersecretary of state for public diplomacy, developing the public diplomacy piece of the strategy has become a top priority.

In some respects, the U.S. government has better tools for this battle than it did on Sept. 11, 2001. The Center for Strategic Counter Terrorism Communication at the State Department has spearheaded the fight since 2010. Today, its staff duels with terrorist propaganda on Twitter and Facebook in at least four Middle Eastern languages and has recently added English language feeds as well.

Staffers engage in hashtag duels and lend support to Muslims who speak out to denounce terrorism. The CSCC has launched the #Notinmyname campaign on Twitter, which encourages Muslims to speak out in defense of their religion against violent extremists who threaten to hijack it. Though the digital battlefield is a major challenge, the United States’ technological edge is significant.

Meanwhile, the Obama administration needs to reconsider the wisdom of closing down of the Office of Strategic Communication at the Pentagon, which was shuttered in November 2012. The office was always controversial and criticized by liberal media for engaging in psychological warfare and propaganda. Yet, its staff were among the most insightful when it came to understanding the phenomenon of radicalization as well as the tribal cultures of Iraq and Afghanistan. Still, then-Secretary of Defense Robert Gates was only too happy to hand over the remains of its functions and budget to the State Department under Hillary Clinton.

Another element in a strategy has to be reform of U.S. international broadcasting to make it more effective in reaching target audiences. A tug of war has developed between Congress and the Broadcasting Board of Governors, which won’t help the work of countering extremists and autocracy in target broadcast countries.

Gone are the days of warm, fuzzy and “multifaceted” documents on public diplomacy. Today’s public diplomacy must have a hard edge. It must look more like the deliberate and carefully crafted strategies of Cold War days. It must be like Reagan’s Directive 77, which established the Office of Public Diplomacy within the White House and established an interagency working group to coordinate the elements of national power that Dempsey talked about. We will need them all.