Q&A: How Worried Should We Be About Ebola Spreading in U.S.? 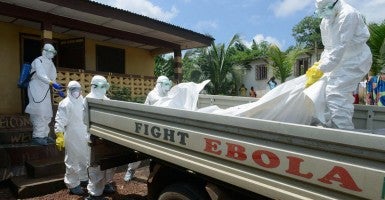 Liberian Red Cross staff carry the body of a patient who died after being infected with the Ebola virus onto a truck on Sept. 4, 2014, in Monrovia, Liberia. (Photo: Tomoaki Nakano/Newscom)

Yesterday, it was announced that the first case of Ebola had occurred in the United States.

How huge a difference does it make that we now have someone with Ebola in the United States?

The difference is not that significant.  The Center for Disease Control is the best public health organization in the globe.  They will track down all who have been exposed and begin isolation and/or treatment.

Since it takes time to show symptoms of the disease, isn’t it possible other people have it in the U.S. who came into contact with the first person? Could those people now be giving it to other people?

The patient was symptomatic for a day or so, so it is expected that some others were exposed, and must be isolated and observed.  It is very unlikely that any of the potentially exposed individuals are already showing symptoms.  They are not contagious until they are showing symptoms.  One of the CDC goals will be to find everyone who might have possibly been exposed before they become contagious. General views of Texas Health Presbyterian Hospital Dallas, where the first US patient with Ebola was confirmed. (Photo: Newscom)

What’s the role of the government and Center for Disease Control in combating Ebola?

They monitor the entire health system in the U.S., and the world. They provide assets to help state-level public health officials plan and execute the proper regimen of care and public health measures (isolation, etc.) as needed.  As the situation develops, they adjust the procedures or medical care to maximize the effectiveness.  They also become the governmental focal point for the “ground truth.”

Is Ebola likely to spread across the United States?

It is highly unlikely that a widespread outbreak will occur in the U.S.  The American public health system is highly developed, and our medical care facilities are state of the art.  This will allow for a highly effective response that should keep the spread to a minimum.  The main point is that no one should panic in regards to this situation.