Reminder: Everything the Government ‘Gives’ Someone Must Be Taken From Taxpayer Dollars 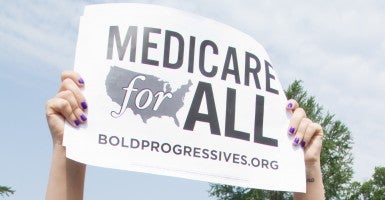 Congress has returned to Washington, but not for long. The looming midterm elections mean that lawmakers are here only for what USA Today calls “a three-week sprint” before they’re back out to campaign. That, in an age of growing dependency on government, means voters can expect to hear more pandering.

‘Tis the season for promises of government largesse. The critical variable is how much the politicians will offer — or rather, how much taxpayers will ultimately be on the hook for.

The problem, to put the matter very plainly, is that there’s no such thing as something for nothing. All money, goods and services — every last dollar of it — must be created through someone’s hard work.

Remember, government has no money on its own. It produces nothing, so it earns nothing. Government has only the money it takes from taxpayers or borrows against the payments of future taxpayers.

We can see some of the results of this in the 2014 Index of Culture and Opportunity, published recently by the Heritage Foundation. The index reports how food-stamp participation has soared over the past decade. From 2003 to 2013, it grew by more than 26 million people.

To show how much of a jump this is, consider that in 1970 the number of individuals receiving food stamps was well below 10 million. By 2003, it was just above 20 million. By 2013, it was fast approaching 50 million.

Meanwhile, the index also charts how total welfare spending has climbed, rising by $246 billion between 2003 and 2013. Today the federal government operates more than 80 means-tested welfare programs that provide cash, food, housing and medical care to poor and low-income Americans.

According to Heritage poverty expert Robert Rector, government spent $916 billion on these programs in 2012, and roughly 100 million Americans received aid from at least one of them, at an average cost of $9,000 per recipient.

That’s a lot of dependency. And it can’t be consequence-free.

“If we keep on this way, we’ll reach a tipping point where there are too many people receiving government benefits and not enough people to pay for those benefits,” writes Rep. Paul Ryan, Wisconsin Republican, in The Wall Street Journal. “That’s an untenable problem. The receivers cannot receive more than the givers can give.”

Besides, charity through government redistribution is not real charity. Thomas Jefferson once said, “The natural progress of things is for liberty to yield, and government to gain ground.” That is what we see taking place through the government’s embrace of moral hazard.

It’s clear that the politics of government largesse and good policy (holding individuals and institutions responsible for their actions) don’t always coincide. The question is, how far down the dependency road will we go before we discover that we can’t turn back?