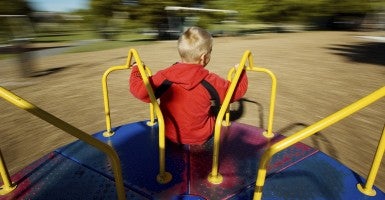 A South Carolina woman, Debra Harell, was arrested last month for letting her daughter play unsupervised in the park.

According to a new poll released by Reason magazine, the majority of Americans agree that it should be illegal to leave children unattended at the park.

The national poll finds that 68 percent of Americans would make unsupervised child’s play for kids under 9 years old at a public park illegal. An opposing 28 percent believe children younger than 9 should be allowed to play in a public park unaccompanied by a parent.

According to the poll, party politics doesn’t reflect a disparity. Democrats and Republicans seem to agree for the most part that children should remain under the close eye of an adult.

As children grow older, the demographics shift slightly: 53 percent of Americans believe 12 year old children should be allowed to play unsupervised in the park, while 43 percent believe they should not.