For Some Schools, Educating Undocumented Students Is ‘Business as Usual’ 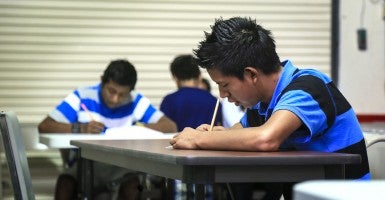 Since the beginning of the year, the federal government has released more than 2,000 undocumented students to sponsors—most relatives—in Virginia. (Photo: Lannis Waters/The Palm Beach Post)

An influx of undocumented and even unaccompanied minors coming to Virginia may be new—and news—to many, but it won’t be to those who work in the commonwealth’s public school systems.

Since the beginning of the year, the federal government has released more than 2,000 undocumented students to sponsors—most relatives—in Virginia. Many will start at their neighborhood public schools on Sept. 2.

“For us, we’ve been doing this forever,” says one administrator.

Some schools will have to make room for a few more. But helping enroll school-aged children who aren’t citizens—as federal law requires—is just a typical part of the school year for those such as Gladis Bourdouane, communications director for family engagement and public information for Arlington County Public Schools.

“For us, we’ve been doing this forever,” Bourdouane said. “This is nothing new. Our practices continue to remain the same. We have very good processes in place. For us, this is business as usual.”

As federal and state education departments are reminding school divisions of through letters and emails, the Supreme Court’s Plyler v. Doe decisionrequires public schools to educate children regardless of citizenship status and provide them the same opportunities as children in the country legally.

Children without citizenship or visas are eligible for free or reduced lunch through the National School Lunch Program, a program that cost Americans $11.6 billion in 2012.

As of 2009, about 70,000 children of illegal immigrants were enrolled in special English instruction classes, adding another $440 million for taxpayers, according to the Federation for American Immigration Reform.

FAIR says Virginians spend about $1.5 billion a year educating roughly 95,000 children of illegal immigrants, although it doesn’t make a distinction between children born in the United States and other countries.