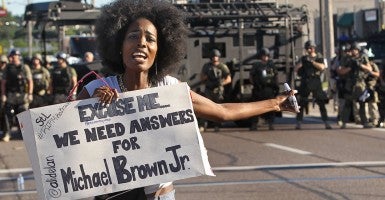 Over the weekend in Ferguson, Mo., an unarmed 18-year-old black man named Michael Brown was shot and killed by a police officer. The incident is under investigation by the St. Louis County police department and reports indicate the FBI has opened a “civil rights investigation” of the shooting. Meanwhile, riots and angry protests have erupted for five consecutive days and nights in defense of Brown. As unrest grew, police used tear gas to dissolve crowds. These photos are a brief look into the chaos that has engulfed the St. Louis suburb since Saturday.

>>> Overmilitarization: Why Law Enforcement Needs to Scale Down Use of Military Hardware and Tactics Mya White, wearing a red hat in this Aug. 11 photo, was shot in the head Aug. 13 from a passing car during a demonstration in Ferguson.  (Photo: UPI/David Broome) Workers clean up after looting the night before. (Photo: Laurie Skrivan/St. Louis Post-Dispatch/MCT) During the fourth night of unrest, a protester takes shelter from the tear gas exploding around him. (Photo: David Carson/St. Louis Post-Dispatch/MCT) These men demonstrate their displeasure during the second day of protests in front of the QT that was burned to ruins the night before. (Photo: Richard Ulreich/ZUMA Wire/Newscom)