Maybe Johnny Can’t Read Because These Workers Crowd Out Teachers 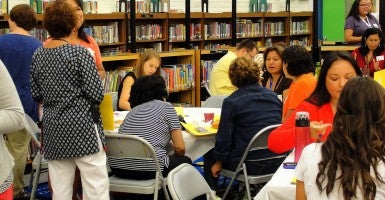 Teachers and other staff hold a 'back to school' meeting at K.W. Barrett Elementary School in Arlington, Va. (Photo: K.W. Barrett/Creative Commons)

Half of America’s public school employees aren’t classroom teachers, according to a new study. Instead, they’re non-teaching personnel such as instructional aides, bus drivers, cafeteria workers, secretaries, and librarians.

It hasn’t always been this way.

The study from the Thomas B. Fordham Institute, a nonprofit think tank specializing in education policy, found that the number of non-teaching staff grew by 130 percent from 1970 to 2010. Their salaries and benefits account for one-quarter of current education spending.

To show where each state is on the spectrum between least and most non-teaching personnel per 1,000 students, Fordham created this map: So why are non-teachers on the rise? The Fordham Institute left that up to school district and state education officials to explain.

By using national, state, and local data, though, “The Hidden Half: School Employees Who Don’t Teach” attempts to draw attention to what some education experts consider an alarming trend.

By a wide margin, Nevada and South Carolina public schools had the fewest non-teaching workers per 1,000 students, at 26 and 28 respectively, the study found. Virginia, Vermont, and Wyoming had the most at 104, as the chart below shows.

Lindsey Burke, the Will Skillman Fellow in education policy at The Heritage Foundation, argues for reducing the number of non-instructional and administrative positions in public schools:

States should consider cutting costs in areas that are long overdue for reform and pursue systemic reform to improve student achievement. Specifically, states should refrain from continuing to increase the number of non-teaching staff in public schools.

Michael Petrilli, president of the Fordham Institute, told The Daily Signal that the results of the study should encourage policymakers to “raise tough questions about whether these trends are helping or hurting children.”

Among the most significant findings of  “The Hidden Half’,” the authors say in a release on the study: