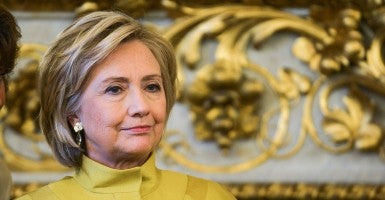 Former US State Secretary Hillary Clinton seen during a reception given at the French Ministry of Foreign Affairs in Paris (Photo: Rabbo/ABACAPRESS/Newscom).

Former Secretary of State Hillary Clinton repeatedly has sought to blame Voice of America and the other broadcasters for ineffectual U.S. messaging to the Arab world.

Last year before the House Committee on Foreign Affairs, Clinton described the BBG as “practically defunct in terms of its capacity to be able to tell a message around the world.” She kept up the criticism in her book “Hard Choices,” saying the BBG and Voice of America played an important part of U.S. outreach during the Cold War. “But we had not kept up with the changing technological and market landscape.”

But in recent days, Clinton herself has become an object of criticism over her comments and the state of international broadcasting in general. Congress is working to reform the Broadcasting Board of Governors and the $700 million operation it oversees—legislation passed the House last week on a voice vote.

And officials have begun to point out Clinton could have done much more to aid the operation.

She sat on the board for six years while she was Secretary of State but attended only two meetings in that time, and both were described as highly scripted events. The two undersecretaries for public diplomacy under Clinton also attended only a few board meetings each. Neglect and inattention from State allowed the BBG and its staff to pursue their own agenda.

“It is hard to take seriously her criticism of BBG or VOA when she simply never attended a meeting [when] she was a member or advocated her views to us in any serious format,” former Broadcasting Board of Governors member board member Victor Ashe told the Washington Times on Monday. “Had she attended, we would have adopted her advice and agenda, in all likelihood.”

In the massive failure of the Obama/Clinton Middle East policy, which has left the region vulnerable to the advance of radical Islamists, international broadcasting is but a small factor. U.S. broadcasting to the Middle East leaves a lot to be desired, but it is hardly the only reason the region is in turmoil. Other reasons include the withdrawal of U.S. troops from Iraq (and Afghanistan), inaction and inconsistency relating to Syria and weakness in dealing with Iran.

Hillary Clinton is right about the BBG, but she fails again to take responsibility. She could have had a voice and made a difference as Secretary of State. There is no evidence she even tried.