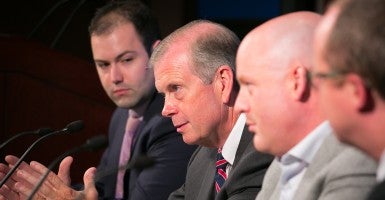 Walberg’s legislation, introduced Monday, would raise the standard of proof necessary for the government to seize property and reinstate due process so the government is required to  prove a property owner’s involvement in criminal activity.

“To me, it sounds like common sense,” Walberg said. “It does not detract away from good law enforcement going after criminals or criminal activities.”

The bill also addresses what Scott Bullock of the Institute for Justice calls a “complete violation” of federalism built into the current law by limiting equitable sharing agreements between the Department of Justice and local or state government agencies.

“There are hundreds of frightening anecdotes in this reverse lottery where an unlucky few fund law enforcement activities by bearing the hidden tax of civil forfeiture,” Kloster said.

The certification, falsified by the Maryland Transportation Authority Police, legitimized the use of a drug-detecting dog that discovered $122,640 in a passenger’s luggage at the Baltimore-Washington International Airport. According to the paper, the federal prosecutors knowingly used this fraudulent documentation in its attempt to keep the cash for the government.

The panelists pointed to the “perverse” incentives enabled by civil forfeiture as the fundamental problem with the law. In many cases, according to Balko, proceeds from seized forfeiture property go directly to the individual police department or prosecutors office, creating the incentive to find drug or criminal connections where there may not be any.

“Every economist tells you that incentives matter,” Bullock said. “You give people the wrong incentives it should not be surprising that they act accordingly.”

According to Balko, author of “Rise of the Warrior Cop: The Militarization of America’s Police Forces,” many police agencies build forfeiture into their annual budget, which further incentivizes police to meet those minimum goals.

“If forfeiture’s supposed to be what you find in the course of doing a drug investigation it shouldn’t be something you’re relying on in your budget every year,” Balko said.

Civil forfeiture also violates due process, according to the panelists, because under current law property is considered “guilty” until the owner is able to prove it innocent.

“The police can seize your property if they can even loosely connect it to some sort of crime—drug crime is the most common,” Balko said. “You then have to go to court to win it back and basically prove you earned that property legitimately.”

But despite the introduction of Walberg’s bill and various other efforts to amend the law, Balko said substantial civil forfeiture reform will be difficult to achieve.

“It’s going to take some political courage to reform this because you’re going to get a lot of pushback from police organizations,” Balko said. “They will fight tooth and nail on this. It’s a sacred cow for them. Again, a lot of their budgets depend on this at this point.”