Guatemala Wants $2 Billion for Border Crisis. Why One Activist Says U.S. Should Ignore It. 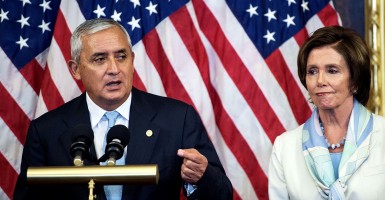 Guatemalan President Otto Perez Molina says $2 billion in federal aid and other U.S. investment in Central America could help end the flood of immigrants across the U.S. southern border.

But it’s a fool’s game, says the leader of a charity serving immigrants from Honduras.

“I think giving money to these governments is a serious mistake,” said Francisco Portillo, president of the Honduran Francisco Morazan Integrated Organization in Miami. “Corruption in our country [Honduras] is huge, no limits. And the money they are talking about is coming from our taxes.”

Giving money to Central American governments in Guatemala, Honduras and El Salvador is basically the same as throwing it away, he said.

Instead, Portillo said, President Obama and Congress should “ensure it is spent on helping these children who are returned to their countries.”

But the issue is more complicated, warned The Heritage Foundation’s Ana Quintana, a research associate on Latin America.

Quintana, who wrote a report this month on U.S. foreign assistance to Mexico, Guatemala, Honduras and El Salvador, added:

In order to mitigate the threats destabilizing the region, we need to recognize that their stability is in our interest. The Obama administration’s overemphasis on economic development over security initiatives compounded by defense cuts has left much to be desired. As history is evidence, deteriorating conditions in Central America will only result in further unlawful migration.

Guatemala’s Molina said to “attack the root of the problem,” the United States needs “to think about making investments in countries such as Guatemala, El Salvador and Honduras.”

But things not only haven’t improved, they’ve gotten worse. Nearly 60,000 unaccompanied children have already crossed the border this year.