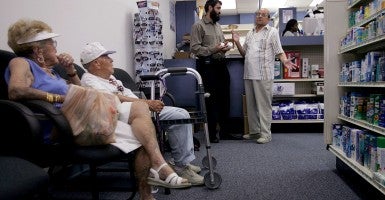 The annual Medicare Trustees report was released today, detailing the dire financial status of the Medicare program. In large part, it reiterates what has been known for decades, the Medicare program faces an unsustainable financial future, which imposes a major burden on taxpayers and jeopardizes access to care for seniors.

A few of the report’s most important facts:

The Part A trust fund is projected to be exhausted by 2030. The Hospital Insurance (HI) trust fund, which funds Medicare benefits for Part A (inpatient services) is primarily financed through the Medicare payroll deduction. The trust fund has been running deficits, meaning spending more on benefits than it takes in through payroll taxes, since 2008 and is expected to continue to do so through 2014. The projected date when the trust fund balance is projected to hit zero fluctuates a bit each year and this year the trustees project it will be in 2030—four years later than last year’s projection.

This means that benefits can only be paid out to the extent that money comes in, requiring either a benefit reduction, tax increase, or some combination of both. Earlier this month, the Congressional Budget Office estimated the size of the gap in funding is 0.8 percent over the next 25 years, worsening in the future. According to the CBO,

Eliminating a gap of that size would require an immediate and permanent increase in HI payroll taxes from 2.9 percent to 3.7 percent [about a 28 percent increase] of taxable payroll as currently projected, an immediate and permanent cut in spending on Part A equal to about one-fifth of current spending, or some combination of tax increases and spending cuts with an equal present value.

However, it is critical to remember that Part A’s trust fund only represents one part of the Medicare program and thus it does not present a complete picture of the financing troubles facing seniors and taxpayers. Over the long-term and under a more realistic set of policy assumptions, the entire Medicare program was estimated last year to have an unfunded obligation of $36 trillion. This means that the government is currently $36 trillion short of the funds it needs to pay for the benefits promised to seniors over the next 75 years.

The baby boomer challenge. The baby boomer generation (persons born during the period between the end of World War II and the mid-1960s) is retiring and flooding the Medicare program with an estimated additional 10,000 beneficiaries per day since 2011 and will continue to do so until 2030—growing the Medicare population to about 81 million. This poses a significant issue because current workers fund current beneficiaries’ benefits. Indeed, taxpayers fund about 89 percent of total Medicare spending.

Specifically for Part A financing, according to the trustees, “While every beneficiary in 2013 had about 3.2 workers to pay for his or her HI benefit, in 2030 under the intermediate demographic assumptions there would be only about 2.3 workers for each beneficiary.”(pg. 67).

According to the report:

By 2040, simulations suggest that approximately half of hospitals, two-thirds of skilled nursing facilities, and 90 percent of home health agencies would have negative total facility margins, raising the possibility of access and quality of care issues for Medicare beneficiaries…

Providers could not sustain continuing negative margins and would have to withdraw from serving Medicare beneficiaries or (if total facility margins remained positive) shift substantial portions of Medicare costs to their non-Medicare, non-Medicaid payers. (Pages 208-209).

Medicare is in urgent need of reform. Its financing challenges stem from its structural flaws and thus it requires a structural reform of the program. Obamacare does not achieve this goal in any meaningful way; to the contrary, the law’s payment reductions further jeopardize seniors’ access and quality of care.