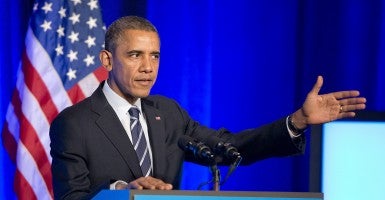 Federal lawmakers have been trying for decades to reduce the burden of paying for college. Congress has significantly expanded lending, lifted caps on borrowing, and cut interest rates on federal student loans. Parents even became eligible to take out loans to pay for children’s college in the 1980s through the Parent PLUS program.

The Obama administration recently used executive action to make federal loan terms even more-generous for students. The executive action extended something known as Pay As You Earn to students who took out loans prior to 2007, extending this taxpayer-financed subsidy to some 5 million additional borrowers.

PAYE is an income-based repayment option, created in 2012. Income-based repayment existed prior to 2012, but was less generous than the new PAYE plan. The PAYE plan caps the amount a student must pay monthly on his loans at 10 percent of discretionary income, with complete loan forgiveness kicking in after 20 years. If a student goes into “public service” — i.e., government or non-profit work — upon graduation, loan forgiveness kicks in after just 10 years.

Capping loan repayments, forgiving balances — none of these options are free. Taxpayers, many of whom don’t hold bachelor’s degrees themselves, must pick up the tab for this federal largesse.

Moreover, generous income-based repayment options and loan forgiveness — and federal student loans and grants generally — do nothing to mitigate ever-increasing college costs. In fact, college costs over the past few decades have risen in tandem with increases in aid, suggesting such aid might actually exacerbate the problem. Why should a university work to keep tuition and fees in check when there is a virtually open spigot of federal aid, readily available to students, with little concern about the student’s credit-worthiness or ability to pay back the loan later?

Equally problematic are issues of equity: Federal higher education subsidies shift the responsibility of paying for college from the student, who directly benefits from attending college, to the taxpayer. College graduates will earn $650,000 more on average over the course of a lifetime than those with just a high-school diploma.

One way Congress could actually help with the college cost issue would be to follow the lead of Sen. Mike Lee, R-Utah, and Rep. Ron DeSantis, R- Ponte Vedra Beach, who have introduced proposals that would fundamentally restructure higher education by reforming the ossified accreditation system.

Currently, accreditation is a de facto federal enterprise, with federally sanctioned regional and national accrediting agencies now the sole purveyors of accreditation. The result has been a system that has created barriers to entry for innovative start-ups — insulating traditional brick-and-mortar schools from market forces that could reduce costs — while making it difficult for students to customize their higher-education experience.

The Lee/DeSantis proposal, known as the HERO Act, would decouple federal financing (student loans and grants) from accreditation and allow states to establish flexible accreditation models.

South Carolina, for instance, could allow Boeing to credential aeronautical engineering courses, and Texas could enable Texas Instruments to credential mathematics courses. A student might spend a semester in a traditional college setting followed by an apprenticeship at Microsoft, and then spend time taking individual courses approved by a variety of organizations.

Such a model would enable students to access course content geared toward the skills they need to successfully climb the ladder of economic mobility, without confining them to a single, expensive, brick-and-mortar college experience.

Instead of continuing to spend, cap and forgive, Congress should pursue reforms, such as decoupling federal financing from accreditation, that actually hold the potential to reduce college costs. That’s something Pay As You Earn and other federal subsidies won’t do.

Originally posted on the Orlando Sentinel.