How Eric Holder Has Destroyed the Justice Department’s Reputation 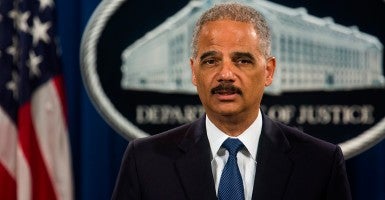 I don’t know who the next U.S. attorney general will be, but I know I pity that person. Restoring the Justice Department’s reputation in the wake of Eric H. Holder Jr.’s tenure will take a lot of work.

You can find out just how big a task it will be in “Obama’s Enforcer: Eric Holder’s Justice Department,” a new book by John Fund and Hans von Spakovsky. Even at a relatively slim 217 pages, it’s quite a bill of indictment.

It’s one thing to read about certain cases as they pop up in the news cycle — an article about a civil rights investigation here, a blog post about Operation Fast and Furious there. It’s another to assemble them in one place and get the big picture in one sitting.

Holder is the first attorney general in U.S. history to be held in contempt of Congress. Considering his behavior toward the legislative branch, it’s not surprising. He stonewalled, for example, when the Senate Judiciary Committee questioned him about the scandal that erupted when it was revealed that the Internal Revenue Service was targeting conservative organizations.

Or take the testimony he gave the House Judiciary Committee when asked about prosecuting the press over publishing classified material. Holder swore that he had never been involved in that or even thought about doing so.

Yet the committee subsequently learned that Holder had approved a search warrant for Fox News reporter James Rosen’s emails by “swearing to a federal court that Rosen was a co-conspirator in a national security leak investigation.”

How did Holder explain this gap between his answer and the truth when the committee asked about it? He didn’t. He refused to answer.

Then there’s the deplorable way the Civil Rights Division has been run under Holder and Thomas Perez, an assistant attorney general from 2009 to 2013.

In their chapter “The (Un)Civil Rights Division,” Fund and von Spakovsky detail numerous instances in which Holder and Perez “pursued a militant civil rights agenda intended to help Democrats win elections and implement a socialized America where racial, ethnic, and sexual quotas are required in everything from college admissions to public employment to school discipline.”

ButHolder will probably be best known for overseeing Operation Fast and Furious, which put more than 2,000 guns into the hands of a Mexican drug cartel and led to the deaths of hundreds of Mexican citizens and a U.S. Border Patrol agent. When federal lawmakers began investigating, Holder again opted not to cooperate, but to cover up.

Any claim “that ATF ‘sanctioned’ or otherwise knowingly allowed the sale of assault weapons to a straw purchaser who then transported them to Mexico is false,” Assistant Attorney General Ronald Weich wrote to Republican Sen. Chuck Grassley of Iowa in February 2011. “ATF makes every effort to interdict weapons that have been purchased illegally and prevent their transportation into Mexico.”

But nine months later, after weeks of foot-dragging and attempts to find “dirt” on those who had blown the whistle on Fast and Furious, the Justice Department finally came clean. In November 2011, Holder admitted under oath that the gun-walking had, in fact, occurred. The February denial was rescinded.

To some observers, the idea of a truly ethical Justice Department is something of a pipe dream. As far as they’re concerned, the attorney general is nominated by a president who’s either Democrat or Republican, so we shouldn’t be surprised when he conducts business is a partisan manner.

Such a cynical view, though, is unfounded. Many fine attorneys general have served ethically defensible terms under both Republicans and Democrats. The tenures of Edwin Meese under Ronald Reagan and Griffin Bell under Jimmy Carter, for example, prove that the Justice Department can be run in an entirely independent, professional way.

Holder’s term as attorney general represents the other end of the spectrum: driven by politics, tainted by scandal and mired in corruption. The need for an attorney general that will, in fact, uphold the Constitution in a fair, impartial and ethical fashion has never been greater.

Originally posted on The Washington Times.