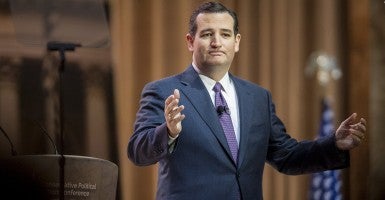 Sen. Ted Cruz, R-Texas, has stepped up efforts in his campaign to #MakeDCListen.

Cruz sent a letter to the Department of Homeland Security yesterday asking the administration to allow Texas to secure its border during the present “humanitarian crisis.”

Cruz described the crisis as a “direct consequence” of the Obama administration’s “refusal” to deal with the growing problem.

“Children are pushed into the hands of criminals because the Obama administration has made it clear to the world that any child who arrives, regardless of whether they are granted formal legal status, will be permitted to stay in the United States,” Cruz wrote.

This comes after yesterday’s announcement by Texas Gov.Rick Perry and other state officials that Texas would commit its own resources to fortifying the border because of the influx of children and other immigrants in McAllen and West Texas.

The number of minors illegally immigrating to the U.S. increased by 1,000 percent since 2009, growing from 3,304 children to nearly 50,000 today, according to the New York Post. Cruz traced this problem to the administration’s “refusal to enforce the law,” which he claims has created “chaos” for the residents and workers along the southwest border.

Cruz told Johnson the “primary purpose” of Immigration and Customs Enforcement and the Border Patrol is to prevent illegal immigration and said Texas is prepared to deal with the situation itself to ensure its own border security.

“Should it be determined that implementation of this proposal would require action by Congress, I stand ready and willing to do my part to protect our citizens and prevent any more children from falling into the hands of notorious human smugglers who often kidnap, rape, abuse, and murder them,” Cruz wrote.