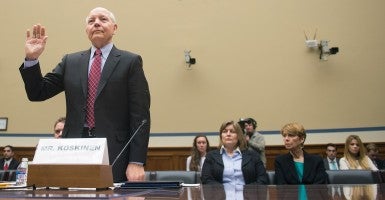 Lois Lerner’s missing emails are likely gone forever because the Internal Revenue Service destroyed the hard drive she used at the time tea party groups were targeted, according to sources on Capitol Hill.

“We’ve been informed that the hard drive has been thrown away,” Sen. Orrin Hatch, R-Utah, told Politico. Two other sources confirmed Hatch’s account.

The news brought a swift response from Darrell Issa, R-Calif., chairman of the House Committee On Oversight and Government Reform. In a statement late last night, Issa said:

If the IRS truly got rid of evidence in a way that violated the Federal Records Act and ensured the FBI never got a crack at recovering files from an official claiming a Fifth amendment protection against self-incrimination, this is proof their whole line about ‘losing’ emails in the targeting scandal was just one more attempted deception. Old and useless binders of information are still stored and maintained on federal agency shelves; official records, like the e-mails of a prominent official, don’t just disappear without a trace unless that was the intention.

The latest revelation sets the stage for what is expected to be a contentious hearing Friday when IRS Commissioner John Koskinen is scheduled to appear before the committee.  In March, the commissioner assured the Oversight and Government Reform Committee the IRS would comply with the request to turn over the emails as congressional investigators probed Lerner’s involvement in the scandal.

>>> IRS in March: ‘We’re Working Very Hard to Get You the Lois Lerner Emails’

As part of Issa’s latest subpoena, he asked the IRS to turn over “all hard drives, external drives, thumb drives and computers” and “all electronic communication devices the IRS issued to Lois G. Lerner.”

Lerner, who was held in contempt of Congress for her refusal to cooperate, was director of the IRS’ tax-exempt office at the time tea party groups faced delays and additional scrutiny in their applications to the IRS. Last week, the IRS revealed it had “lost” an email messages from a period between January 2009 through April 2011 because of  a computer crash.