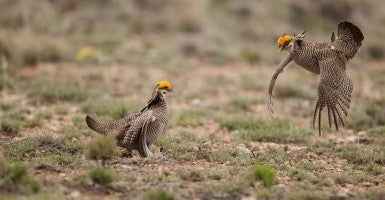 SANTA FE, N.M.—Welcome to New Mexico, where a colorful chicken and a very small mouse are causing a big ruckus.

Last week, four counties in New Mexico joined in a lawsuit stemming from the U.S. Department of Interior and U.S. Fish and Wildlife Service listing the lesser prairie chicken as a threatened species.

The announcement came just one day after the Fish and Wildlife Service declared the meadow jumping mouse should be protected under the Endangered Species Act, giving it greater habitat protection but angering ranchers in a southern New Mexico county who are odds with the federal government over water and property rights.

“Yes, New Mexico has become a focal point,” said Bryan Bird, program director for WildEarth Guardians, an environmental group based in Santa Fe that hailed both decisions. “On the one hand, we’re blessed to have these beautiful, unusual animals in our state, but on the other hand, we’ve mistreated our lands so badly that they require” listings to protect them.

“Once again, the U.S. Fish and Wildlife Service chose to cater to big-city radical special interests instead of protecting our jobs, and ignored the fact that conservation and economic growth are not mutually exclusive,” Rep. Steve Pearce, R-N.M., said in a statement.

In the meantime, officials from Eddy, Roosevelt, Lea and Chavez counties—in the heart of New Mexico’s oil patch—joined a lawsuit filed in federal court in Texas by the Permian Basin Petroleum Association, claiming the decision to protect the lesser prairie chicken puts too heavy a burden on the industry and accusing the feds of not following correct procedures when they made the listing.

“Historically, there have been at least three times when scientists have believed the bird was truly on the verge of extinction,” Ben Shepperd, president of the Permian Basin Petroleum Association, told KWES-TV. “What the data shows now is that the birds’ numbers and range of habitat have continued to grow although they’ve slowed down some during this period of extended drought.”

The Fish and Wildlife Service says the population of the chicken—known for its energetic clucking and strutting during mating—has been reduced by 50 percent since 2012.

Protecting the habitat for the meadow jumping mouse led the U.S. Forest Service in Otero County, in southern New Mexico, into an ongoing dispute with local ranchers.

The Forest Service reinforced the padlocks at a creek to keep cattle from drinking, saying the herds risk trampling on the area where the mouse lives.

But a group of ranchers say while the Forest Service may have access to the land along the creek, it doesn’t hold the water rights and complain the federal government is overstepping its authority.

“It’s extremely frustrating,” Blair Dunn, an attorney for Otero County, said after a meeting last month failed to reach a compromise. “In the past when we’ve had drought and problems the Forest Service came and opened the gate … but they didn’t have any interest in doing that.”

Just two years ago, many of the same parties were fighting over a different species: the dunes sagebrush lizard.

Efforts to protect the three-inch lizard, whose habitat stretches from southeastern New Mexico to West Texas, threatened to put restrictions on oil and gas production in the area.

But in June 2012, then-Secretary of the Interior Ken Salazar decided against listing the lizard as endangered after the industry and local ranchers agreed to a series of conservation agreements.

So far, the kind of compromise that worked for the lizard hasn’t been reached for the chicken or the mouse.