Cheeseheads Prompt Federal Agency to Back Off Regulatory Threat 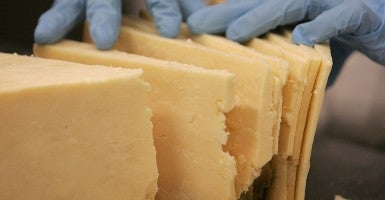 MADISON, Wis.—Don’t tell cheeseheads how to make their cheese.

The U.S. Food and Drug Administration learned this recently when word surfaced the agency might be thinking of banning the longstanding practice among cheese makers of using wooden boards to age their products.

Yesterday, the FDA cut the cheese rhetoric—and seemed to be backing off its position.

In a statement responding to concerns raised by Ben Brancel, secretary of the Wisconsin Department of Agriculture, Trade & Consumer Protection, the FDA clarified in a statement released yesterday that it has not enacted a policy “banning the use of wooden shelves in cheese-making, nor is there any FSMA requirement in effect that addresses this issue. Moreover, the FDA has not taken any enforcement action based solely on the use of wooden shelves.”

Wisconsin Gov. Scott Walker said he is pleased with the FDA’s response and that the agency seems willing to “engage members of the cheese industry as they evaluate the use of wooden shelves.”

“I look forward to working with the FDA and Secretary Brancel to ensure the use of wood in the cheese-aging process is able to continue in Wisconsin and across the country,” the governor said in a statement Wednesday.

The controversy began after an FDA official noted in a message to New York regulators that wood shelves and boards lack adequate sanitation safeguards and do not conform to regulations related to plant utensils and equipment.

“[P]roper cleaning and sanitation of equipment and facilities are absolutely necessary to ensure that pathogens do not find niches to reside and proliferate,” regulators stated in the communication.

The FDA’s follow-up statement maintained those concerns but noted that the agency is open to “evidence that shows that wood can be safely used for specific purposes, such as aging cheese.”

The debate prompted Rep. Peter Welch, D-Vt., to draft an amendment to a federal appropriations bill that would settle the matter. Welch told Politico he’s not convinced the latest guidance is enough.

“We are moving forward with our amendment to prohibit the FDA from banning this centuries-old practice,” he said. “Artisan cheese makers cannot afford to live with this threat to their livelihoods caused by regulatory ambiguity at the FDA.”

Wisconsin cheese makers believed the science was settled long ago.

A scientific review conducted by Bill Wendorff of the Wisconsin Center for Dairy Research and French researcher Bénédicte Coudé concluded that wooden boards could be used safely for cheese aging, provided thorough cleaning and heating procedures were followed.

Those procedures are in place in Wisconsin, according to Brancel.

The Food Safety division at the Wisconsin Department of Agriculture, Trade and Consumer Protection has a policy requiring department approval of industry procedures for maintaining cheese-aging boards in a sanitary condition.

“These procedures are there to ensure that ‘utensils and other surfaces that contact food must be adequately cleanable and properly maintained,’ as mentioned in the FDA statement,” the ag secretary wrote in a news release. “This includes wooden shelving used in an aging process that gives Wisconsin cheeses their distinct flavor and appeal.”

The state known as America’s Dairyland knows a thing or two about cheese and milk production—and standard-bearing safe production at that.

The dairy industry contributes $26.5 billion per year to the state’s economy, and most of that comes from the 600 varieties, types and styles of cheese Wisconsin produces. Last year, Wisconsin produced 2.84 billion pounds of cheese, more than a quarter of all the cheese produced in the U.S., according to the Wisconsin Milk Marketing Board.

That’s a lot of cheese.

And that’s why talk of government interference has cheeseheads, well, cheesed off.

“This process is not only part of our state’s heritage, but contributes to the growing worldwide demand for quality Wisconsin cheeses, produced by highly skilled cheese makers,” Brancel said. “Supplying this demand has a multi-million-dollar impact on our dairy economy.”

Jeanne Carpenter of Madison, creator of the Cheese Underground blogsite, said the FDA’s “back-stepping in both tone and message is welcome news for the hundreds of cheese makers across the country who have invested their life savings in making premium artisanal cheese and aging it on wooden boards.

“I want to give a special shout-out to every consumer who wrote a letter, signed a petition, left a comment on a blog or Facebook page and generally made standing up for artisan food a main-stream American issue. In the end, everything is politics. Thank you for taking a stand. We will most certainly need you in the future.”