Bobby Jindal: Of Course We Still Can Repeal Obamacare 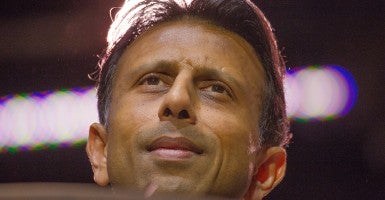 Gov. Bobby Jindal, a potential 2016 presidential candidate, this week hit back at claims that the health law known as Obamacare cannot be repealed.

In an op-ed for FoxNews.com, the Louisiana Republican said the mainstream media, Obamacare supporters and even some conservatives have accepted the Affordable Care Act as the law of the land that cannot be touched.

“The country that won two world wars and put a man on the moon cannot, it is believed, repeal a disastrous public policy,” Jindal wrote. “Says who? Why not?”

>>> Check Out: Exclusive Interview With Bobby Jindal on His 2016 Plans

The House of Representatives since 2010 has voted 54 times to change aspects of Obamacare, with six of those votes on measures that would have repealed the entire law. But Republican lawmakers faced backlash and blame when they pushed through a last-minute budget without funding for Obamacare that led to a three-week federal government shutdown.

President Obama said in April that the debate over repealing Obamacare was over, declaring “The Affordable Act is here to stay.”

Yet, roughly 60 percent of U.S. adults surveyed in a Politico poll said the Obamacare debate is not over, even in light of the federal government’s reporting 8 million people had signed up for health plans through Obamacare’s insurance exchanges. Public views on Obamacare have been divided since its passage, according to Kaiser Family Foundation’s monthly tracker. Its latest poll shows 46 percent have an unfavorable view of the law and 38 percent support it.

>>> Read More: 60 Percent of Voters Say Obamacare Debate Is Not Over

In his op-ed, Jindal argued the health law isn’t working because health care costs continue to escalate and millions of consumers have faced cancellations of their old health plans or access to their former doctors.

“Many families struggling with rising premiums and co-payments might believe that they will never see relief,” he wrote. “But the notion that we can’t slow the growth of health spending is just as fanciful as the idea that Obamacare cannot be repealed.”