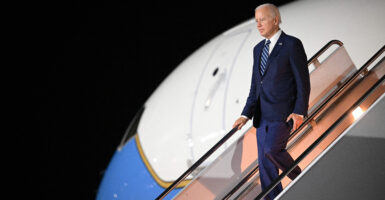 The intelligence community has remained silent on a potential investigation into the national security threats posed by President Joe Biden keeping classified documents in his office and at his residences. Pictured: Biden steps off Air Force One upon arrival at New Castle Airport in New Castle, Delaware, Oct. 27, 2022. (Photo: Mandel Ngan/AFP/Getty Images)

Weeks after the FBI raid at Mar-a-Lago, the U.S. intelligence community announced it would do an assessment of the risk to national security posed by former President Donald Trump maintaining records at his private home.

No similar announcement has been forthcoming about the classified information stored at President Joe Biden’s private home in Delaware and at the Penn Biden Center.

The Justice Department has been aware of the discovery of classified information at the Penn Biden Center since November. Days after the information leaked, more classified documents were discovered at Biden’s private home.

On Jan. 10, Rep. Mike Turner, the top Republican on the House Permanent Select Committee on Intelligence, asked Director of National Intelligence Avril Haines for an immediate review and damage assessment following reports that then-Vice President Biden removed classified information at an undisclosed and unsecure non-government office, where it was held for at least six years.

The Office of Director of National Intelligence has not responded to Turner, a source familiar with the situation told The Daily Signal.

The office also did not respond to inquiries this week from The Daily Signal.

“It has been reported that a portion of the materials at issue were marked ‘sensitive compartmented information,’ indicating the highest classification and most sensitive intelligence information in our government,” the Turner letter to Haines says. “This discovery of classified information would put President Biden in potential violation of laws protecting national security, including the Espionage Act and Presidential Records Act. Those entrusted with access to classified information have a duty and an obligation to protect it. This issue demands a full and thorough review.”

“We request that you instruct the National Counterintelligence Executive, in consultation with the Inspector General of the Intelligence Community and other Inspectors General as appropriate, to conduct a damage assessment,” Turner’s letter continues. “In addition, we ask that you commit to providing, as soon as possible, this Committee with an appropriate classified briefing on the conduct of the damage assessment.

The FBI raided Trump’s Mar-a-Lago home on Aug. 8. By late August, Politico reported that the Office of Director of National Intelligence had teamed with the Justice Department to do a national security risk assessment of the documents held by Trump.

“The Department of Justice (DOJ) and the Office of the Director of National Intelligence (ODNI) are working together to facilitate a classification review of relevant materials, including those recovered during the search,” Haines wrote.

The director said in the letter that the review is an “assessment of the potential risk to national security that would result from the disclosure of the relevant documents,” and added that it will “not unduly interfere with DOJ’s ongoing criminal investigation.”