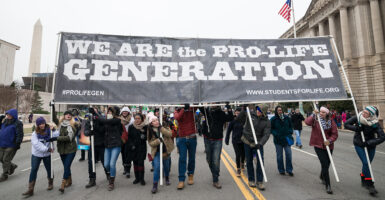 Almost 70% of Americans support limiting abortion to the first three months of pregnancy, a survey by the Knights of Columbus-Marist Poll released Wednesday revealed.

“Nearly 7 in 10 Americans believe abortion should be limited,” Marist Poll Director Barbara L. Carvalho said in a news release. “After a year of contentious public debate over the Supreme Court’s Dobbs decision, the results are comparable to the findings of a Knights of Columbus-Marist Poll conducted last January.”

The poll, which demonstrates widespread support for pro-life legislation, comes two days before the 50th annual March for Life, in which pro-lifers will march to the U.S. Capitol to celebrate the end of Roe v. Wade and urge states to pass laws protecting the unborn.

More than 90% of respondents said they support pregnancy resource centers, a target of Democratic condemnation in the past year, according to the poll. Last week, more than 200 House Democrats voted against denouncing the attacks on pro-life pregnancy centers since the leak of the draft opinion indicating the overturn of Roe v. Wade.

“Since the start of the Knights of Columbus-Marist Poll in 2008, we’ve seen a consistent and clear consensus of Americans who support restrictions on abortion,” Knights of Columbus Supreme Knight Patrick Kelly said in a news release. “Likewise, an overwhelming majority of people—90% this year—believe that our laws can protect both the mother and her unborn child.”

“Too often, the abortion debate is framed in the context of supporting either one or the other,” Kelly added. “The reality is, we can—and must—craft laws that protect both mothers and their children.”

Almost 80% of Americans surveyed said the law should not require doctors, nurses, or other health care providers with religious objections to abortions to perform them. Additionally, 60% of Americans said they oppose abortion for children with Down syndrome.

Democrats claim most Americans support abortion “rights,” touting unclear polls from groups like Monmouth and NPR. Yet a closer look at the Monmouth results reveals that 54% of Americans oppose a national law codifying Roe, while only 46% want Congress to pass a national law.

Kelly said the Knights hope to increase their support for mothers and unborn children.

“The Knights will redouble our efforts to restore a culture of life and advance a culture of compassion for pregnant women in need,” Kelly said.