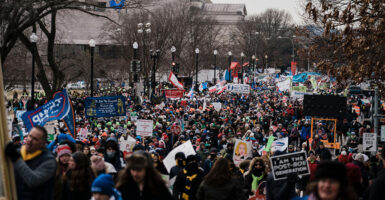 March for Life President Jeanne Mancini announced Thursday that the theme of this year’s march will center on moving into a post-Roe world. Pictured: Pro-lifers march along Constitution Avenue in Washington, D.C., for the 49th annual March for Life on January 21, 2022. (Photo: Kent Nishimura/Los Angeles Times/Getty Images)

March for Life President Jeanne Mancini announced that the theme of the 2023 march will center on marching into a post-Roe America.

“There’s a lot of confusion about the inherent dignity of the unborn child,” said Mancini at The Heritage Foundation in Washington, D.C., Thursday. “Our enemy is the lie that abortion is good for women,” Mancini added. This lie, she explained, is a key issue the pro-life movement will tackle following the overturn of Roe v. Wade. (The Daily Signal is the news outlet of The Heritage Foundation.)

The next steps for building a culture of life will be to continue marching boldly every January, she added. Pro-lifers will no longer march to the Supreme Court, but to the U.S. Capitol and state capitols throughout the country.

The Dobbs ruling allowed states to make their own laws on abortion. For this reason, March for Life leaders insist there is still much work to do after Roe. At least 16 states and the District of Columbia are working to pass laws that would enshrine the “right” to abortion.

Other states, including Oklahoma, Mississippi, and Texas, have allowed their pre-Roe laws protecting unborn children to take effect following Dobbs.

Mancini said Thursday that pro-life Americans must celebrate the momentous overturn of Roe v. Wade. “I want to thank all of you who’ve marched over the years, all of you who have borne witness to the poorest of the poor, the most vulnerable, the unborn by marching on the Capitol, by marching to the Supreme Court,” she said.

Mancini added that she believes testimony of pro-life activists over the past 49 years moved the Supreme Court justices in their Dobbs ruling this June. “Your testimony marching in Washington, D.C., shutting down this city every year for the largest annual human rights demonstration worldwide has borne fruit,” she said. “It’s absolutely borne fruit in the overturn of Roe.”

“This is a moment where our culture has been changed,” said Mancini.

Heritage Foundation President Kevin Roberts shared three strategies for the pro-life movement at the Thursday event. Roberts said that “first and foremost, the fight does go to the states,” but congressmen cannot “give up the fight in the imperial city of Washington, D.C.”

Currently, Roberts continued, “there is not a single, major public institution in this country that is pro-life.” Pro-lifers must lean into institutions that we can still salvage, while parting with those that are too far gone.

Lastly, Roberts said that pro-life Americans should focus on their own daily lives, rebuilding families, communities, and states. “How we treat others and how we prioritize our relationships is what it means ultimately to be pro-life,” he said. “That’s the long view.”