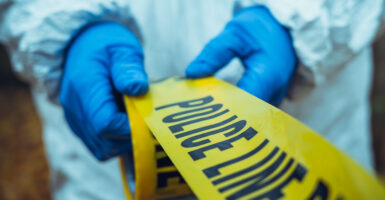 The Federal Bureau of Investigation is offering rewards for information on multiple attacks against pro-life pregnancy centers. (Photo: Getty Images)

The Federal Bureau of Investigation is offering rewards for information on multiple attacks against pro-life pregnancy centers.

Since the leak of the draft Supreme Court opinion indicating that Roe v. Wade would soon be overturned, at least 78 pro-life pregnancy centers have been attacked, firebombed, or vandalized. Last week, over 200 House Democrats voted against condemning this slew of attacks.

Authorities have apparently made no arrests in these crimes, many of which may constitute violations of the Freedom of Access to Clinic Entrances Act, which the Justice Department has repeatedly used to prosecute pro-life activists as a response to the overturn of Roe v. Wade.

But on Thursday, the FBI announced that it seeking the public’s help to identify individuals responsible for a number of incidents, including the June 27, 2022, arson of Two Hearts Pregnancy Aid in Seattle; the July arson and vandalism at Mother and Child Education Center in Portland; the June 10, 2022, firebombing of Gresham Pregnancy Resource Center in Portland; and the May 8, 2022, firebombing of Oregon Right to Life in Portland.

Asked why it has taken the FBI so many months to make such an announcement, the FBI told The Daily Signal: “The FBI leverages numerous investigative tools when conducting an investigation. Over time, some of our investigations may fall out of the public’s awareness. These rewards are being announced to bring increased public attention to these incidents with the goal of generating additional investigative leads for the FBI to pursue.”

Authorities offered $25,000 rewards for information in the investigations, noting that the FBI can investigate the incidents as “potential acts of domestic violent extremism, Freedom of Access to Clinic Entrances Act (FACE Act) violations, or violent crime matters, depending on the facts of each case.”

“On the night of June 27, 2022, the Two Hearts Pregnancy Aid clinic building located at 3202 Hoyt Avenue in Everett, Washington, was vandalized,” the FBI Seattle release said. “Evidence of an incendiary device was recovered from the scene. It is believed to have been thrown through a window in an attempt to cause a fire.”

At Gresham Pregnancy Resource Center, the FBI said, law enforcement responded to a middle-of-the-night call to find a fire inside the building.

“Investigators believe several Molotov cocktails were thrown through a kitchen window in order to ignite the fire,” the release says. “Investigators found several large bottles in the kitchen with fire accelerant confirmed on the floor.”

At Oregon Right to Life, police responded to 911 calls that someone had thrown “multiple Molotov cocktails” at the building.

“From nearby security footage, investigators determined the suspect retrieved an item from the trunk of their vehicle and walked towards the building,” the release says. “A glow could be seen on the security footage that was determined to be flames from the Molotov cocktail thrown at the building. Shortly after, the individual was observed running back to the vehicle. Investigators believe the suspect may have been driving a white sedan, possibly a 2017-2018 Hyundai Elantra.”

“Today’s announcement reflects the FBI’s commitment to vigorously pursue investigations into crimes against pregnancy resource centers, faith-based organizations, and reproductive health clinics across the country,” FBI Director Christopher Wray said in a statement. “We will continue to work closely with our national, state, and local law enforcement partners to hold responsible anyone who uses extremist views to justify their criminal actions.”