Report: US ‘More Aggressive and Radical’ Than Europe on Experimental Transgender Hormones and Surgery for Children 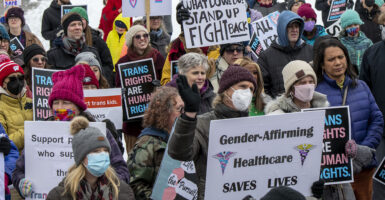 “Europe is becoming ever more conservative while the United States has pursued a path that’s ever more aggressive and radical,” Dr. Stanley Goldfarb, a board-certified kidney doctor, former professor at the University of Pennsylvania School of Medicine, and board chair of Do No Harm, told The Daily Signal in a phone interview Tuesday.

“Extreme gender ideology drives the United States to provide transgender medical care to younger children, while Europe goes a safer and more scientific route,” reads the report, “Reassigned.” Do No Harm, a group of physicians, health care professionals, patients, and policymakers aimed at protecting health care from the “radical, divisive, and discriminatory ideology” of transgenderism, released the report Monday.

The report breaks down the key differences between the American approach toward transgender medical treatment for children and the hesitance of many European countries to follow the U.S. trend.

Many prominent American health institutions push “gender affirmation,” “which assumes that gender incongruence can manifest as early as age four and that questioning a minor’s gender self-definition is harmful and unethical,” the report notes. They do so despite the weak evidence on the subject.

Goldfarb pointed to former transgender teen Chloe Cole as “the perfect example of the harm” that his organization seeks to prevent. “When she was a young child, she had some psychological problems,” he noted. Doctors only required “very minimal psychological counseling” before starting her on so-called puberty blockers and cross-sex hormones. She also underwent a mastectomy, and Goldfarb noted that she suffers from “many surgical complications from the procedure.”

“She understands now that she went through a process that’s really harmed her,” he noted.

“There’s no real informed consent for a child,” Goldfarb said. He noted that advocates “phrase it as ‘parents can consent and children can assent.’”

“How may children are harmed by this? [Are there] any children who are benefited by this? No one knows,” he added.

For these and similar reasons, countries such as the United Kingdom, Sweden, and Finland “now discourage automatic deference to a child’s self-declarations on the grounds that the risks outweigh the benefits, while also calling for months-long psychotherapy sessions to address co-occurring mental health problems,” the report notes.

Goldfarb characterized Europe’s approach as “watchful waiting,” focused on “psychological counseling” and allowing some interventions “under the auspices of a carefully-conducted clinical trial.”

The report concludes that “the United States is the most permissive country when it comes to the legal and medical gender transition of children. Only France comes close, yet unlike the U.S., France’s medical authorities have recognized the uncertainties involved in transgender medical care for children and have urged ‘great caution’ in its use.”

Goldfarb emphasized differences in “the way these countries have started to view the entire process.” He noted that many European countries like Norway only have one or two centers that engage in these controversial interventions on minors, so “they have a way of being able to standardize these treatments in a way that’s impossible in the United States.”

Many countries, such as Belgium, Denmark, Luxembourg, Norway, and the United Kingdom, require either a psychologist or an interdisciplinary team to diagnose gender dysphoria (the condition of painfully and persistently identifying as the gender opposite one’s biological sex), and many require either six months or a year of presenting as the gender opposite one’s biological sex to undergo medical transition. U.S. insurance companies require a diagnosis to pay for transitions, but an individual paying out of pocket could transition without a diagnosis.

The U.S. also has fewer restrictions on young children’s access to drugs that suppress the release of sex hormones in order to prevent the normal process of puberty. While some states restrict access, other states have no restrictions, and The New York Times reported that some physicians are prescribing blockers to patients as early as age 8. Most states require parental consent before age 18, but Oregon does not require consent for minors age 15 and above.

Most European countries require parental consent for such drugs until age 16 or 18.

Most European countries do not allow sex-reassignment surgery before age 18, while “gender-affirming” mastectomy has been performed on children as young as 12 in the U.S. The World Professional Association for Transgender Health issued new guidance in June 2022 recommending some surgeries starting at age 15.

As Goldfarb noted, the U.S. has far more gender clinics than most European countries, according to the report. While America has more than 60 pediatric gender clinics and 300 clinics provide hormone interventions to minors, Sweden has four; Belgium has two; Denmark has three; and Iceland, Ireland, the Netherlands, and Norway only have one. In the United Kingdom, the single clinic, the Tavistock clinic, is scheduled to close this year after a review deemed it unsafe. The U.K. will open two gender clinics to replace it.

While many European countries have changed their protocols for treating minors in recent years, no major U.S. medical organization has reversed its guidance, the report notes. Ireland’s adult national gender service is urging changes, while the Finland Health Authority recently stated that psychotherapy, not hormones, should be the first-line treatment for gender-dysphoric youth. France’s National Academy of Medicine, Sweden’s National Board of Health and Welfare, and the U.K.’s National Health Service have issued warnings about permanent interventions for children.

Goldfarb said that Europe’s increasing hesitance on this issue should give Americans pause, and lead them to consider the potential harms of putting children on this path.