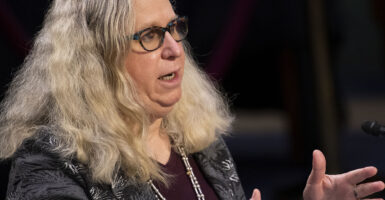 Rachel Levine, a man who identifies as a woman, gave a sermon attempting to enlist Pittsburgh children's doctors into the transgender activist movement. Pictured: Levine speaks Feb. 25, 2021, during a confirmation hearing on Levine's nomination as assistant secretary for health at the Department of Health and Human Services. (Photo: Caroline Brehman/CQ-Roll Call, Inc)

Dr. Rachel Levine, a man who identifies as a woman, tried to enlist children’s doctors and nurses into the transgender activist movement, urging them to become evangelists and preach the gospel of transgenderism. Anything less would be a betrayal of their profession and science itself, he argued.

Levine, assistant secretary of health at the U.S. Department of Health and Human Services, claimed that there is a large population of biological males who are really female and vice versa, and these people are likely to commit suicide unless doctors pump them with drugs to delay puberty, introduce a hormone disease into their bodies, and perhaps even remove healthy body parts.

Levine, who graduated from Tulane University School of Medicine, further said that opposition to this “treatment” represents a hateful attack on science and compassion, one that all good doctors must condemn as damnable heresy.

Of course, his sermon did not speak the plain truth of what he meant. He couched his pseudo-religious view—that there is a parallel realm of reality where biological males such as himself are really female (and vice versa) and that biology is a lesser reality to be warped in pursuit of this higher realm—in scientific terms, citing studies about a phenomenon that is imperfectly understood.

Levine made his remarks in a Sept. 22 video message to doctors at the University of Pittsburgh’s Department of Pediatrics, urging them to become “ambassadors” for what he described as “gender-affirming care.” (The video garnered little attention at the time, but it has since surfaced on Twitter.)

He championed “acceptance” as a life-saving message; painted opponents of his ideology as driven by an “agenda” that has “nothing to do with warmth, empathy, compassion, or understanding”; and sent forth the doctors as his new apostles.

“I encourage all of you to think of yourselves as ambassadors to your communities, ambassadors for science, ambassadors for compassion, and ambassadors for care,” Levine intoned. “These conversations don’t have to be limited or restricted to a medical setting. Offer yourselves as informational resources not just for youth but for schoolteachers, principals, school boards, professional organizations, recreation centers, county commissioners, and others who would benefit from this information and your perspective. Please proactively seek opportunities to speak about what you know.”

“Our task is to educate the public in as many forms as possible and we need to have these conversations to question the assumptions that are underlying today’s attacks on trans people,” he added. “Pushing back the veil of ignorance demands this extra effort and this is the challenge before our profession.”

Levine painted a dire picture of an oppressed people, citing high rates of suicidal thoughts and attempted suicides. He blamed this predicament on a demonic society, dismissing any notion that transgender identity may contribute to mental health struggles.

Levine urged doctors to join the side of the angels and painted his opponents as demons. After professing that he has “no room in my heart for hatred,” he urged doctors to “work together against this intolerance” that would dare push back against his worldview.

Levine’s message is far from scientifically sound. Although many national health organizations support “gender-affirming care,” the Florida Board of Medicine and the Florida Board of Osteopathic Medicine last month approved a new rule banning puberty blockers, cross-sex hormones, and transgender surgeries for minors.

Florida Surgeon General Joseph Ladapo had warned that the state “must do more to protect children from politics-based medicine. Otherwise, children and adolescents in our state will continue to face a substantial risk of long-term harm.”

“While some professional organizations, such as the American Academy of Pediatrics and the Endocrine Society, recommend these treatments for ‘gender affirming’ care, the scientific evidence supporting these complex medical interventions is extraordinarily weak,” Ladapo wrote to the Florida Board of Medicine.

This trend extends far beyond Florida. Karolinska Hospital in Sweden announced in May 2021 that it would not prescribe hormonal treatments to minors under 16.

In June 2021, Finland released medical guidelines opposing such drugs for minors, noting: “Cross-sex identification in childhood, even in extreme cases, generally disappears during puberty.” The Finnish guidelines add, “The first-line treatment for gender dysphoria is psychosocial support and, as necessary, psychotherapy and treatment of possible comorbid psychiatric disorders.”

In April 2021, Britain’s National Institute of Health and Care Excellence (NICE) concluded that the evidence for using puberty-blocking drugs to treat young people is “very low” and that existing studies of the drugs were small and “subject to bias and confounding.”

Many people who mutilated their bodies in the pursuit of a transgender identity have spoken out against the “cult” that ensnared them.

“I’m a real, live 22-year-old woman, with a scarred chest and a broken voice, and five o’clock shadow because I couldn’t face the idea of growing up to be a woman; that’s my reality,” Cari Stella said in a disturbing YouTube video.

Other detransitioners have supported the states that have banned drugs that would stunt and potentially sterilize minors. “I believe every state needs to pass a law that protects our youth in this way,” Chloe Cole, a woman who desisted from a male gender identity, said about the Arkansas law.

Is it indeed “compassionate” to encourage an identity that is false to a person’s physical body? Would it be compassionate to tell an anorexic girl who wrongly thinks she is fat that she is right to starve herself? Would such a “treatment” for anorexia be right if major medical institutions endorsed it?

Surely medical associations cannot be wrong, correct? History suggests they can be very wrong. “Progressive” scientists once endorsed eugenics and lobotomies as the height of medicine. The inventor of the lobotomy received a Nobel Prize, and many Nobel laureates supported eugenics.

All this evidence should inspire humility among those championing experimental “treatments.”

Yet Levine’s dogma will not abide the testimony of heretics. His harvest is plentiful, and the workers are few, so he urges doctors to preach the gospel of “gender-affirming care” and drive out the demons who dare say that children shouldn’t mutilate their bodies.

Neither HHS nor the University of Pittsburgh’s Department of Pediatrics responded when asked whether Levine’s speech would constitute an “inappropriate endorsement of a philosophical or religious outlook.” Perhaps they’re too busy doing catechesis.