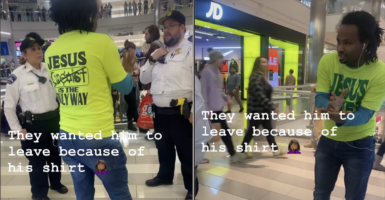 Mall security guards at the Mall of America in Bloomington, Minnesota, ordered a man to remove his “Jesus Saves” T-shirt or leave the mall, footage shows.

“I didn’t do anything,” the man, Paul Shoro, told The Daily Signal in a Facebook message on Tuesday. “They forced me to take off my shirt.” The mall later said security later allowed Shoro to remain in the mall while wearing the shirt. Shoro’s later comments to The Daily Signal suggest a reason behind mall security’s action, revealing the full story.

Bystander Kameko Rawls took footage of the incident, which has since gone viral on social media.

In the video of the incident on Saturday, Jan. 7, a security guard tells Shoro, “I understand that, but Jesus is associated with religion and it’s offending people.”

“People have been offended,” the guard adds. “Like I said, all we’re asking you is to take your shirt off, and you can go to Macy’s.”

“I didn’t speak, I didn’t say anything,” Shoro replies.

“Take the shirt off, and you can go to Macy’s and you can do your shopping, or you can leave the mall,” the guard responds. “OK? Those are your only options right now.”

“The guest referenced in the video was approached by Mall of America security on January 7, 2023,” the mall told The Daily Signal in an email statement. “One week prior, he was issued a 24-hour trespass for soliciting guests. After a brief interaction, the guest was not required to change his shirt and was allowed to remain at the Mall.”

Shoro told The Daily Signal that one week prior to the incident, he had been passing out flyers, which he identified as “Trackts” and “paper with verses,” likely references to gospel tracts.

The Mall of America’s security web page lists soliciting as an example of “conduct that is disorderly, disruptive or which interferes with or endangers business or guests,” which the mall prohibits. The mall prohibits “picketing, demonstrating, soliciting, protesting or petitioning.”

Handing out gospel tracts arguably does not constitute solicitation, but Shoro’s decision to distribute these flyers sets the mall security’s overreaction in context. It seems to reveal why security spoke with him, even though it may not justify their actions.

The front of Shoro’s yellow T-shirt reads, “Jesus Saves,” and the back reads, “Jesus is the only way,” with the “coexist” sign crossed out.

“Jesus Saves! I love the message on this man’s t-shirt—but the Mall of America in MN didn’t,” Graham tweeted. “Security guards approached him & told him to take the shirt off or leave. One guard is on video saying, ‘Jesus is associated with religion & it’s offending people.’”