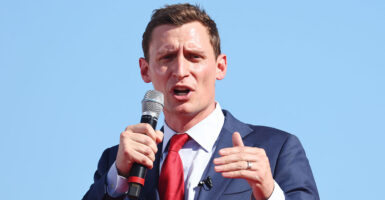 Blake Masters, the former Republican U.S. Senate candidate in Arizona, slammed his Tucson school district for its curriculum’s reliance on the Southern Poverty Law Center, a leftist activist group known for branding conservative organizations “hate groups” on a map with chapters of the Ku Klux Klan.

“The SPLC is as extreme as it is dishonest. That it is now creating curriculum being taught in American public schools should horrify anyone with common sense,” Masters told The Daily Signal in an email statement Friday.

“Was doing some homeschool planning with my wife and we wondered what the boys would be learning at the local public school,” he wrote. “So I pulled up the district’s curriculum page. Even I wasn’t expecting direct links to the SPLC!”

“The schools are not what they used to be. Performance is down, indoctrination is up. This is why universal school choice is so important,” Masters added.

He warned that the new Democratic governor of Arizona, Katie Hobbs, is “focused on mandating gender pronouns in schools.” (Hobbs, whose first executive order bans discrimination on sexual orientation and gender identity in Arizona state agencies, is expected to veto a bill requiring school employees to call a student by pronouns corresponding to their biological sex, unless parents approve transgender pronouns.)

“So buckle up for a lot of left-wing power grabs & a local media that covers for them,” Masters warned. “Support our Republican majorities in the legislature as they work to block this junk and work to craft a positive agenda that treats Arizona children as human beings, not political instruments.”

The webpage Masters highlighted presents vision and mission statements for the Office of Curriculum Instruction, then immediately announces, “Our Curriculum is infused with Multicultural Education.”

My book “Making Hate Pay: The Corruption of the Southern Poverty Law Center” lays out the history of the SPLC and how its program to monitor the Ku Klux Klan and other white supremacist groups, Klanwatch, morphed into Hatewatch, a project that brands mainstream conservative and Christian groups as “hate groups,” placing them on a map with Klan chapters.

After the SPLC fired its co-founder amid a racial discrimination and sexual harassment scandal in 2019, a former staffer claimed that the SPLC’s accusations of “hate” are a “cynical fundraising scam” aimed at “bilking northern liberals.”

The education project rebranded itself “Learning for Justice” in February 2021, and the website no longer mentions how many educators read the magazine or engage with the content. Learning for Justice developed and published the Social Justice Framework cited on the Tucson Unified page.

Among other things, Learning for Justice has published a learning plan on critical race theory for grades 6 to 8. The theory encourages students to deconstruct modern American society on the premise that its institutions are “systematically racist,” despite the efforts of Martin Luther King Jr. and others that led to the Civil Rights Act of 1968 and legal prohibitions against racial discrimination.

Learning for Justice’s Social Justice Framework encourages students to “develop positive social identities based on their membership in multiple groups in society,” to “express comfort with people who are similar to and different from them and engage respectfully with all people,” to “recognize unfairness on the individual level and injustice at the institutional or systemic level,” and to “express empathy when people are excluded or mistreated because of their identities,” among other things.

The document presents 20 goals for each section of multiple grade levels (K-2, 3-5, 6-8, and 9-12), with statement such as “I can feel good about my identity without making someone else feel badly about who they are.” While most of these goals encourage positivity, respect, and empathy, some hint at lessons about “systemic racism.” The Justice 13 goal for grades 9-12 states, “I can explain the short and long-term impact of biased words and behaviors and unjust practices, laws and institutions that limit the rights and freedoms of people based on their identity groups.”

Each section also includes an “anti-bias scenario,” and many of these scenarios focus on LGBT issues, even at young ages.

The K-12 identity anti-bias scenario presents a teacher who “is teaching a unit on family structure and includes gay and lesbian parents in a lesson. [A student] shares that she has two moms.” The K-12 justice scenario involves a teacher developing a lesson for the class “on the effects of family separation” when a student’s uncle gets detained for crossing the border illegally.

The 3-5 identity anti-bias scenario presents a boy who “identifies as a transgender girl” and plans to “share her identity with her classmates.” The teacher helps the male student develop an introduction as “Tiana” and the boy tells his parents that the event “went well.”

The 6-8 identity scenario chides a teacher for “misgendering” a student. The student “uses they/them/elle pronouns and identifies as a non-binary Latine [sic] person.” The document faults one of her teachers for continuing “to use their incorrect pronouns,” and recounts the student’s decision to correct her teacher.

Neither the Tucson Unified School District nor members of the school board responded to The Daily Signal’s requests for comment.

publishing your edited remarks in our regular “We Hear You” feature. Remember to include the url or headline of the article plus your name and town and/or state.