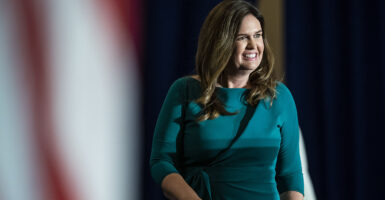 During her inaugural address Tuesday, Sanders pledged to sign an executive order “preventing the political indoctrination of Arkansas’ schoolchildren.”

“As long as I am governor,” she said, “our schools will focus on the skills our children need to get ahead in the modern world—not brainwashing our children with a left-wing political agenda.”

The governor’s office sent copies of the executive orders to The Daily Signal.

The order directs the Arkansas Department of Education not to promote teaching “that would indoctrinate students with ideologies, such as CRT, that conflict with the principle of equal protection under the law or encourage students to discriminate against someone” based on characteristics such as color and race.

Legacy media journalists and proponents of critical race theory use a narrow definition of it as a legal theory taught in law schools to claim that CRT doesn’t reach into the classrooms of K-12 education.

However, the theory involves finding “systemic racism” in various American institutions, including education, and encourages proponents to reexamine every aspect of life through a race-based lens that assumes white people are oppressors and black people are oppressed. Teachers have applied this lens in K-12 education, and Sanders’ order aims to prevent that in Arkansas.

Sanders also signed an order “to respect the Latino community by eliminating culturally insensitive words” by removing the term “Latinx” and its plural and lowercase forms from official state documents.

The order directs all state offices to examine their documents for the term, report these uses to the governor, and replace the term with variations of the words “Hispanic,” “Latino,” and “Latina.” The order cites Pew Research Center’s finding that only 3% of American Hispanics use “Latinx.” It also cites the Madrid-based Real Academia Española, which officially rejected the use of “x” as an alternative to “o” and “a.”

“One can no more easily remove gender from Spanish and other romance languages than one can remove vowels and verbs from English,” Sanders’ order explains.

—Institute a moratorium on hiring and promotion by the state government, except for the Corrections and Public Safety departments, federally funded public employment offices, the legislative and judicial branches, and other elected officials.

—Seek to cut regulations by requiring state offices to gain the governor’s approval for all proposed rules, unless otherwise exempted under state law.

—Initiate an inspector general’s review of all previously issued executive orders, to determine any conflicts.

—Direct the Office of State Procurement to perform a cybersecurity review to protect state information from foreign governments.

—Begin reviews of unemployment applicants at the state Commerce Department in an effort to reduce fraud and waste, citing a U.S. Labor Department estimate that Arkansas spent more than $53 million on improper unemployment benefits over three years.