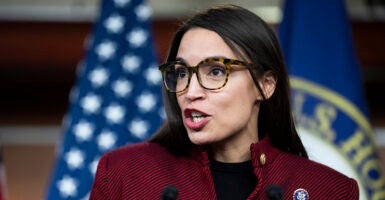 Democrats like Rep. Alexandria Ocasio-Cortez continue to use the phrase Latinx long after it's been shown Latinos hate it. Pictured: Ocasio-Cortez conducts a news conference in the Capitol Visitor Center on April 7. (Photo: Tom Williams/CQ-Roll Call, Inc/Getty Images)

Editor’s note: This piece was originally published in August 2021, but has been updated to reflect statements by Rep. Alexandria Ocasio-Cortez, D-N.Y.

Latinx is the word that just won’t die.

The word reentered the national consciousness Monday when Rep. Alexandria Ocasio-Cortez, D-N.Y., attempted to boost the word, and accused people of starting drama over it.

In a video posted on her Instagram, Ocasio-Cortez said, “I want to have a note on gender inclusivity in Spanish language. People sometimes like to make a lot of drama over the term Latinx.”

“Gender is fluid, language is fluid,” she said before concluding, “Don’t have to make drama.”

Perhaps unsurprisingly, Ocasio-Cortez is not just wildly out of step with the American people, but Latinos as well.

A Gallup poll from last August shows just 5% of Hispanics prefer to use the term “Latinx” when asked how they would like to be called.

The word “Latinx” represents an attempt by leftist academics and activists to make Spanish gender-neutral—in this case, to avoid using the masculine term “Latino” or feminine term “Latina.” These radicals, uncomfortable with a language where gender is baked into the grammar, have decided to ease their discomfort by butchering it instead.

Of course, this bumps up against the natural structure of Spanish, since all nouns, adjectives, and articles have a gendered element to them. Of particular offense to leftists is the default use of the masculine form of a word for mixed gender groups (“los niños,” for example, can be a group of children that are all boys or boys and girls).

As part of a long diatribe posted on Twitter, radical leftist author David Bowles wrote, “This move toward dismantling the default masculine is called inclusive language. And it doesn’t just stop with wanting to find a plural form that will include male and female genders. Not all human beings are male or female. There are non-binary or ‘genderqueer’ folx, too.”

And while it’s unclear where the term “Latinx” originally came from, it has been earnestly embraced by leftists in politics, media, and academia.

Take for example President Joe Biden. In a speech from June highlighting vaccine hesitancy in minority communities, Biden said, “It’s awful hard as well to get Latinx vaccinated … Why? They’re worried they’ll be vaccinated and deported.”

Merriam-Webster added it to its dictionary back in 2018, defining it as “of, relating to, or marked by Latin American heritage—used as a gender-neutral alternative to Latino or Latina.” Strikingly, in an article about how the word is used and its possible origin, Merriam-Webster acknowledges “Latinx” is not widely used.

“Though Latinx is becoming common in social media and in academic writing,” Merriam-Webster says, “it is unclear whether it will catch on in mainstream use.”

Thankfully, as the polling data shows, so far it hasn’t. Ordinary Americans have proven resilient against woke attempts to change language, even as leftist elites try their hardest to make it so.

Yet this disconnect between the language used by those in power and the average American highlights a darker reality. The hostile takeover and retooling of language from the top down is part of the left’s attempt to shape America toward its own twisted goals, kicking and screaming if need be.

“Latinx” represents an overlooked aspect of the Marxist attack on our institutions. While critical race theory and identity politics are justifiably frequent targets of conservative ire, the war on words rages silently in the background.

We have already seen the consequences of a world where the left has a monopoly on acceptable word use.

Peter Vlaming, a French teacher whose story was previously covered by The Daily Signal, was fired for using female pronouns for a girl who thought she was a boy, while teachers and administrators in Loudoun County, Virginia, are forced to contend with new regulations stipulating they call students by their “chosen name and gender pronouns that reflect their consistently asserted gender identity.”

In the words of communist organizer Saul Alinsky, “He who controls the language controls the masses,” and the new attempt by woke elites to dictate how we speak certainly follows that mantra. It is not difficult to imagine a future where continued pressure from the ivory tower erodes resistance to words like “Latinx” at the cost of more popular and rational language.

Thankfully, conservatives have an advantage. The left’s effort to dictate Newspeak is an unpopular one that falters in the face of consolidated pushback. Conservatives should expose the left’s ridiculous language games to the American people whenever possible.

As the Gallup poll shows, we’re on the winning side.