How Google Is Attempting to ‘Newspeak’ the English Language 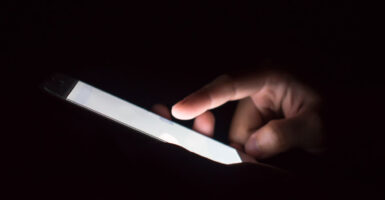 While authoritarian attempts to control language are nothing new, the zeal and reach of the modern left should alarm lovers of free speech. (Photo: Phira Phonruewiangphing/Getty Images)

In a social engineering move that seems straight out of the pages of George Orwell, Google recently introduced an update to its Google Docs platform that encourages users to use more “inclusive” language.

Inclusive language advocates argue that words like “he” and “she” are transphobic, or that phrases like “blind date” “build on the millennia of discrimination people with disabilities have encountered.” In short, making language more “inclusive” entails replacing words and phrases that offend only the most ardent social justice warrior with banal and neutered language, in the name of protecting the oppressed.

The current zeitgeist surrounding acceptable speech harkens back to Orwell’s “Newspeak,” a language intentionally designed by the totalitarian regime of his dystopian novel “1984” to restrict the very act of thinking to only government-approved thoughts.

While authoritarian attempts to control language are nothing new, the zeal and reach of the modern left should alarm lovers of free speech. A visceral aversion to politically incorrect language—which used to be contained to radical college campuses—has since broken loose and begun its long march to cultural dominance.

And who better to control language than technology companies, many filled to the brim with leftists who view it as their sacred duty to dictate acceptable ideas and discourses to the unwashed masses?

These true believers are perfectly willing to push their ideology and force compliance to their language restrictions. Noncompliance can lead to suspensions, revocation of service, or in the case of social media sites, deplatforming. As time goes on, the forced compliance will shift the window of acceptable public discourse, moving the culture ever leftward.

And when the culture shifts toward so-called inclusive language, the law often does as well. Take, for example, the multiple cases of male transgender athletes dominating in female sports.

Lawyers representing three female runners in the recently dismissed Connecticut transgender athlete case were forced to contend with a judge who demanded they use the phrase “transgender female” to refer to men who think they’re women.

As The Christian Post reported, “That is what the case is about,” Judge Robert Chatigny of the U.S. District Court of Connecticut, who presided over the trial, contended. “This isn’t a case involving males who have decided that they want to run in girls’ events. This is a case about girls who say that transgender girls should not be allowed to run in girls’ events.”

So what is the end goal of this radical restructuring of our language?

Inclusive language is a sleeper agent, designed to infiltrate American society and shift acceptable discourse to the radical left’s ends.

We see the consequences of this new woke crusade on English every day.

Stories abound of ordinary people who have been fired or canceled for committing a linguistic faux pas. Peter Vlaming, a French teacher whose story was previously covered by The Daily Signal, was fired for using female pronouns for a girl who thought she was a boy.

The push for inclusive language has even wormed its way into the highest echelons of government. In February, the Biden administration’s Department of Homeland Security shifted away from what it called “dehumanizing” language when referring to illegal aliens. The word “illegal” was nixed, replaced by phrases like “noncitizen,” “undocumented noncitizen,” or “undocumented individual.”

As the radical leftists who dominate Google continue their push for orthodoxy, we must not become complacent. Language forms the backbone of how a culture and people view themselves, and the woke operatives in business and government know this.

If lovers of free speech don’t fight back against inclusive language, it’s not difficult to imagine future generations dominated by homogenous leftist thought.