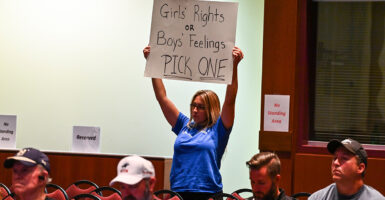 A woman protests Wednesday evening as the Loudoun County School Board in Virginia moves to adopt a policy that it says protects transgender students. (Photo: Ricky Carioti/The Washington Post/Getty Images)

Loudoun County, Virginia, one of the wealthiest counties in the nation, will allow male students who identify as females to use girls’ restrooms and locker rooms at school. The policy also allows biological males to play on girls sports teams.

The vote on Policy 8040, or the “Rights of Transgender and Gender-Expansive Students,” came a day after more than 100 parents, teachers, and area residents expressed both support and opposition during a lengthy school board meeting.

“My priority is the rights, privacy, and safety of women and girls, which will be obliterated if you implement Policy 8040,” Kara Dansky, a self-described feminist and president of the U.S. chapter of the Women’s Human Rights Campaign, said in her remarks.

Emotions ran high during the nearly four hours of public comment Tuesday. Fifth grade teacher Laura Morris, who said she has taught for the county for five years, resigned while speaking to the school board, which cut her off when her two minutes of allotted time expired.

“School board, I quit,” Morris said, her voice breaking as she fought tears. “I quit your policies, I quit your trainings, and I quit being a cog in a machine that tells me to push highly politicized agendas on our most vulnerable constituents—the children. I will find employment elsewhere.”

Policy 8040 allows students in the school district about 40 miles west of Washington, D.C., to use restrooms and locker rooms that “correspond to their consistently asserted gender identity.”

School staff must allow all students to participate in “interscholastic, co-curricular and extra-curricular activities … in a manner consistent with the student’s gender identity.”

The transgender policy requires administrators, faculty, and staff to call students by their “chosen name and gender pronouns that reflect their consistently asserted gender identity.”

“Students who struggle with their gender identity should be treated with compassion, but we should never lie to such children about who they really are, nor force other students and teachers to affirm transgender ideology,” Anderson told The Daily Signal in an email Thursday.

Nor should we sacrifice the privacy, safety, and equality of students by allowing, for example, boys who identify as girls into private facilities intended for girls only or into athletic competition reserved for girls only.

Anderson, president of the Ethics and Public Policy Center, previously was the William E. Simon senior research fellow at The Heritage Foundation, parent organization of The Daily Signal.

Just weeks ago, the Loudoun County school system suspended an elementary school gym teacher, Tanner Cross, after he opposed the proposed transgender policy at a school board meeting. Cross said he would not lie to students by calling them by a pronoun that didn’t match their biological sex.

“I will not affirm that a biological boy can be a girl, and vice versa, because it is against my religion, it’s lying to a child, it’s abuse to a child, and it is sinning against our God,” Cross said during the May 25 meeting.

A judge ordered the reinstatement of Cross after he filed a lawsuit, although the school system has appealed.

Those in favor of the transgender policy also delivered impassioned remarks Tuesday night, urging the board to vote yes.

Another parent of two, Michael Rivera, followed McConnell’s remarks by speaking directly in opposition to the new policy.

“You have failed us,” Rivera told school board members.

Rivera added that after doing some research, he found that “0.4% of people in Virginia are transgender.”

The entire school system is being turned “upside down for 325 kids,” Rivera added, “and we never had a conversation or a discussion about how to do that and satisfy all parties involved.”

“I wish the school board would grow a spine and act like the elected officials they are supposed to be,” he said.

The Loudoun County School Board did not respond to The Daily Signal’s request for comment on the adoption of Policy 8040.

The board approved several amendments to the transgender policy Wednesday, including a requirement that all county school staff receive training on how to care for transgender students and comply with the new policy.

The school board also voted unanimously to add language requiring schools to update restrooms and locker rooms within five years to make the facilities more private. This includes addition of unisex restrooms.

The action comes after months of protests over the transgender policy.

The school board walked out of its meeting room June 22 after voting unanimously to end public comment after the crowd erupted in cheers following remarks from former state Sen. Dick Black.

Black, a Republican who represented parts of Loudoun and Prince William counties from 2012 to 2020, spoke in opposition to the transgender policy during that meeting.

“You’re making teachers lie to their students, and even kids know it’s wrong,” Black told the school board.

After board members left, parent Jon Tigges and others organized the audience to continue delivering comments, but officials soon declared the meeting an “unlawful assembly.”

Police arrested Tigges and another man even as the crowd moved outside and continued delivering comments opposed to the transgender policy.