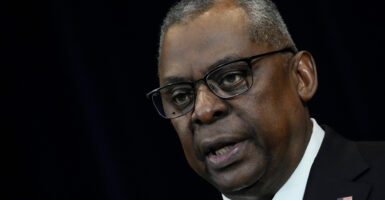 The Department of Defense has rescinded the COVID-19 vaccine mandate for service members. But the Pentagon doesn’t appear to have a plan to reinstate military personnel who lost their jobs for refusing the vaccine.

The Daily Signal asked the Defense Department whether there would be an effort to bring military personnel who had been discharged for refusing the vaccine back into the military.

“Regarding your final question, former service members may petition their Military Department’s Discharge Review Boards and Boards for Correction of Military or Naval Records to individually review and correct personnel records, including records regarding the characterization of their discharge,” Pentagon spokesperson Lisa Lawrence told The Daily Signal in an email Wednesday.

The Defense Department issued a memo Tuesday explaining that military members dismissed for refusing the COVID-19 vaccine may be eligible to receive an honorable discharge, but the memo did not acknowledge any plan to reinstate those men and women.

The Pentagon confirmed to The Daily Signal in December that a total of 8,424 military members have been discharged for refusing the vaccine.

“Service members punished for refusing the mandate should be reinstated,” said Green, a three-tour combat veteran. “Those who do not wish to return should receive full veteran benefits where appropriate for their service to our country, and service members who were ineligible for these veteran benefits should also retroactively receive them in full.”

The military vaccine mandate came to an end Dec. 23, with the signing of the National Defense Authorization Act for fiscal year 2023.

More than two weeks after the vaccine mandate expired, but within the allotted 30-day period to release the new guidance, the Pentagon issued a memo announcing the official end of the mandate.

“Section 525 of the NDAA for [fiscal year] 2023 requires me to rescind the mandate that members of the armed forces be vaccinated against COVID-19 …. I hereby rescind that memorandum,” Austin wrote in the memo.

The memo explains that “individuals currently serving in the armed forces” will not be dismissed “solely on the basis of their refusal to receive the COVID-19 vaccination if they sought an accommodation on religious, administrative, or medical grounds.”

Lawrence, the Pentagon spokesperson, told The Daily Signal that “Secretary Austin is directing the secretaries of the military departments to cease any ongoing reviews of current service members’ religious, administrative, or medical accommodation requests solely for exemption from the COVID-19 vaccine or appeals of denials of such requests.”

Ahead of Congress’ vote on the NDAA in December, Republican Sens. Ted Cruz of Texas and Ron Johnson of Wisconsin introduced an amendment that would have allowed those who refused the vaccine to be reinstated and provided with back pay. The amendment failed.

“This vaccine mandate never should have been put in place,” Rep. Kevin Hern, R-Okla., told The Daily Signal. “It has negatively impacted recruitment and the ability to maintain the amount of military men and women needed to keep our country safe.”

Rep. Ralph Norman, R-S.C., said that forcing military members to choose between getting vaccinated and having a livelihood “was completely inappropriate and contrary to the very freedoms those service members defend.”

“Just as troubling is this apparent delay for the [Pentagon] to formally issue its memo on the rescission of the mandate, more than two weeks after this was directed through the NDAA,” he added.

Mike Berry, director of military affairs for First Liberty Institute, said in a statement Wednesday that while the “secretary of defense did as Congress directed,” it was “the bare minimum owed to our brave service members.”

“In fact, the secretary’s memo still permits military commanders to require the vaccine in making decisions regarding unvaccinated service members,” Berry said. “There are still far too many in our military who were forced out or are still facing career-ending actions because of the COVID vaccine mandate. America owes it to those who defend our Constitution and our freedoms to ensure they do not lose theirs.”