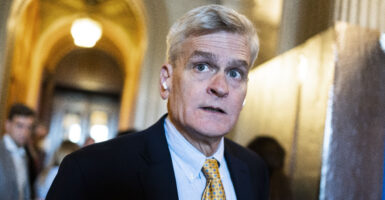 Four Republican senators voted against reinstating members of the military who were discharged for refusing to take the COVID-19 vaccine. Pictured: Sen. Bill Cassidy, R-La., during a Senate vote in the U.S. Capitol Aug. 4, 2022. (Photo: Tom Williams/CQ-Roll Call, Inc/Getty Images)

Four Republican senators voted Thursday against reinstating military members who were discharged for refusing to get vaccinated against COVID-19.

Mitt Romney of Utah, Mike Rounds of South Dakota, Bill Cassidy of Louisiana, and Susan Collins of Maine voted against Republican Wisconsin Sen. Ron Johnson’s amendment that would have reinstated and provided backpay to military members discharged for refusing to get vaccinated.

Johnson sought to amend the 2023 National Defense Authorization Act, which passed the Senate, 83-11, Thursday night. Though this amendment failed, Republicans were able to include a provision in the NDAA that halts the Department of Defense from forcing service members to get the COVID-19 vaccine.

“These were direct orders from commanding officers,” Cassidy said in a statement to The Daily Signal on the vaccine mandate. “I voted to end the COVID vaccine mandate in the military but it is not Congress’s place to intervene in the chain of command and set a precedent for military personnel to ignore direct orders.”

The other senators did not immediately respond to requests for comment from The Daily Signal.

The Daily Signal previously shared a number of stories about military members discharged for refusing to be vaccinated.

“There is one word that sums up what has been perpetrated against the good men and women who simply reserved their rights afforded to them by the Constitution,” Air Force member Brian Saunders told The Daily Signal. “Betrayal.”