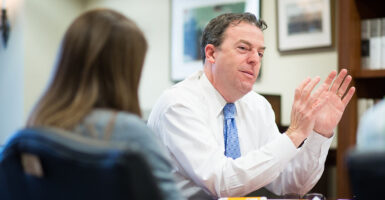 Left-leaning media outlets have villainized Florida’s Republican governor, Ron DeSantis, painting his recent moves in the Sunshine State’s education system as a hostile takeover from the Right. So Matthew Spalding, a professor at Hillsdale College whom DeSantis recently appointed to the New College of Florida’s board of trustees, decided to set the record straight.

“DeSantis Allies Plot the Hostile Takeover of a Liberal College,” Michelle Goldberg wrote in The New York Times. Goldberg referred to Hillsdale College as “the template for this reimagined New College” and noted that the conservative Hillsdale—based in southern Michigan—worked with then-President Donald Trump to create a patriotic education curriculum.

“DeSantis moves to turn a progressive Fla. college into a conservative one,” runs the headline on Valerie Strauss’s Washington Post story. The subheadline: “His administration says he aims to make it a ‘Hillsdale of the South.’” Strauss brands Hillsdale a “bastion of far-right conservatism.”

The New Republic‘s Jack McCordick also slammed DeSantis’ appointment of Spalding, writing that Hillsdale and the Claremont Institute “eagerly hitched their wagons to Trump” and are “home to some of the country’s most notorious coup plotters and insurrectionists.”

McCordick suggested that Spalding’s appointment by DeSantis represents a threat to the “uniquely proactive nature of the New College’s student body.” He quoted alumnus Derek Black, who credited that student body with his conversion from a “white nationalist activist,” implying that the governor’s new appointments might enable white nationalism to emerge at the school.

These media outlets eagerly cited remarks from Christopher Rufo, a Manhattan Institute scholar best known for combating critical race theory and homelessness. DeSantis also named Rufo to New College’s board. In remarks to The New York Times, Rufo said he aimed to reverse a Marxist “march through the institutions.”

“If we can take this high-risk, high-reward gambit and turn it into a victory, we’re going to see conservative state legislators starting to reconquer public institutions all over the United States,” Rufo told the Times.

The media outlets also cited James Uthmeier, DeSantis’ chief of staff, who told the Daily Caller: “It is our hope that New College of Florida will become Florida’s classical college … more along the lines of a Hillsdale of the South.”

“Florida is where woke goes to die,” DeSantis said in his victory speech following his nearly 20-point reelection victory in November.

The Republican governor has taken aim at critical race theory, a framework that claims to find “systemic racism” in American institutions and that critics say leads educators to treat white students as oppressors and treat black students and other minorities as oppressed. DeSantis also has opposed transgender ideology and signed a bill protecting parental rights in education and preventing institutionalized instruction of LGBT lessons in kindergarten through third grade.

Spalding, vice president of Washington operations and dean of the Van Andel Graduate School of Government at Hillsdale’s satellite campus in the nation’s capital, did not address DeSantis’ program but insisted that the political controversy is “overwrought.”

Spalding, a former director of the B. Kenneth Simon Center for American Studies at The Heritage Foundation, parent organization of The Daily Signal, also said he doesn’t aim to turn New College into a carbon copy of Hillsdale College. Rather, he told The Daily Signal, he intends to champion liberal arts and classical education at the historic Florida institution.

“The political controversy surrounding recent appointments to the board of New College of Florida is overwrought,” Spalding said in a written statement provided to The Daily Signal. “I am honored by the appointment and look forward to engaging in reform to achieve educational excellence.”

“As a professor, dean, and vice president at a successful liberal arts college, my focus is on the work at hand: restoring New College’s ‘distinctive mission’ as the ‘residential liberal arts honors college’ of Florida,” Spalding said. “I appreciate the complimentary nods to Hillsdale College, but we are not going to serve New College’s mission by remaking it into a carbon copy of another institution.”

“In the liberal arts, the college—which means a partnership, one between students and faculty—works together and comes into conversation with great thinkers and writers who’ve asked timeless questions about human purpose, about the good and justice, and how to live well,” he added. “The very aim of liberal arts education is to liberate the mind from current fads and popular ideologies by inviting students to address these questions in pursuit of the truth about what it means to be fully human. That pursuit transcends contemporary politics.”

Getting “such an education teaches one how to think, not what to think,” Spalding added. “The surging enrollment at my home institution and others like it shows that students hunger for such serious academic inquiry.”

The author of this article, Tyler O’Neil, is a Hillsdale College alumnus.